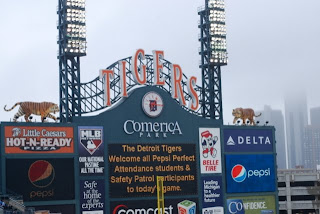 I took the day off and headed to Detroit to catch a ballgame. Last night's game was rained out. It was drizzling when this game began and cold--temperature at 1:05 PM, game time, was 51 degrees. 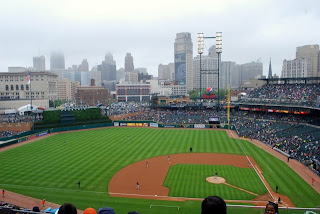 The grass was wet enough that when people slid after a ball, you could see water... Here, at the beginning, you couldn't see the tops of the buildings. By the end of the game, the clouds were breaking up. 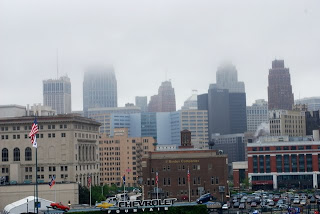 Another foggy shot... This was an afternoon game played under the lights! Sadly, the Tigers lost to the White Sox, 6 to 2. The vendors were also suffering. With a light jacket, I wasn't interested in a "cold beer.' Others fans, some dressed in heavy coats, didn't seem very interested either. Later, the vendors were back selling "hot chocolate." At $4 a cup, I decided I wasn't that cold... 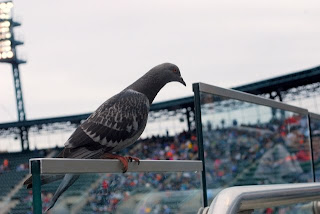 This fellow stopped by to see me (or see if I had anything to eat). Teams are named after birds, but I've yet to see a Cardinal, Oriole or Blue Jay in a ball park. But I've seen plenty of pigeons and seagulls!
Posted by sage at 9:54 PM