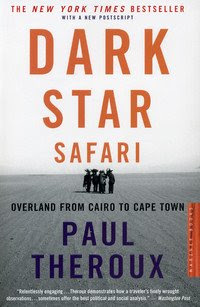 The book I read was like the cover to the right. Rather stark! I included a second cover because I liked it better!

I’m not sure why it took me so long to get around to reading this book. I’ve had it for a couple of years and it has mostly sat on my nightstand. I’d occasionally pick it up in order to dust. I decided it was time to read it, so I committed myself to use it as one of my books for Joy’s Summer Non-fiction Reading Challenge and then took it with me to the Quetico. After a week in the wilds, the book will go on my shelf looking well used! 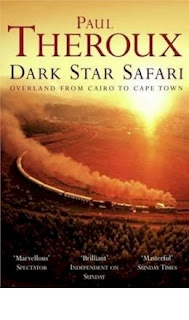 Dark Star Safari isn’t your typical African travelogue. Theroux isn’t interested in following Hemingway’s footsteps. In fact, Theroux despises Hemingway’s African safari stories that have little connection to the people of the continent (311). This is a book about Theroux’s journey and the people he meets along the way.

The word Safari, as Theroux notes in the opening pages, is Swahili for “journey.” It has nothing to do with exotic animals; in Theroux’s opinion safari is an escape for the modern world of cell phones and computers. So, with his sixtieth birthday on the horizon, he sets off into the Dark Continent.

Theroux begins his journey in Egypt, heading south along the Nile, seeing the great sights built by Pharaoh’s. After successful running the bureaucratic huddles for an American to get a visa into the Sudan, he continues on down the Nile. In the Sudan, he learns about the country’s past while traveling with a local driver on the road built by Osama Ben Laden. They explore ancient temples and sleep on sand dunes. In the Sudan, he encounters mostly men. One man, learning he was an American, calls both Bush and Clinton Satan (they have an equal hatred of them as Clinton bombed the Sudan), and then in the next sentence asks how he could move to America so he could make money (80).

Theroux’s next country is Ethiopia, a proud nation of poor people, or as Theroux describes them, “a race of aristocrats who had pawed the family silver” (92). Theroux takes the train from the capital, Addis Ababa, to Dira Dawa and then up into the mountains to the ancient city of Harar, where the hyenas that roam at night. Leaving Ethiopia, he travels the “longest road in Africa, heading south to Kenya. The border between Kenya and Ethiopia is lawless and Theroux, who bums rides and hires a variety of drivers, finds himself in broken down vehicles and even being shot at by the shifta (bandits) as he makes his way to Nairobi. In this region, he notes, “there were few roads and there were many shifta.” (149)

Hating Nairobi (Theroux hates all African cities), he heads to Uganda where 34 years earlier he had been happy and full of hope. At the time he was teaching in a university, had his first book published, and became a husband and father. (198-204) That idyllic life ended with the rise of Idi Amin and Theroux fled the country. Throughout his journey, Theroux is surprised at the absence of older and even middle aged people. AIDS and wars have ravaged the continent and he would have been considered an old man. However, in Uganda, he found a few of his former colleagues who had survived Amin and the turmoil and now held respectful positions in the government.

Theroux leaves Uganda on a steamship, taking it southward across Lake Victoria and into Tanzania, then a train across the country to the coast along the Indian Ocean. He crisscrosses back across Tanzania on the Kilimanjaro Express (which has nothing to do with the mountain). This was a train built by the Chinese for the people of Tanzania. Arriving in Mbeya, he heads south into Malawi, where in the early sixties he spent two years working with the Peace Corps, teaching school. At that time the country was known as Nyasaland. Like Uganda, his departure from Malawi had also been quick. He had befriended a fellow teacher who was recruited for a government position. When this friend became involved in an attempted coup against the reigning dictator, Theroux assisted his friend in his exodus from the country. For this, Theroux was drummed out of the Peace Corp as a disgrace and his friend, who’d gone to Uganda, got Theroux a teaching position in a university there. (307)

Leaving Malawi, Theroux hires a local man with a boat to paddle him down the Shire River into Mozambique, through some of the most remote sections of East Africa. From Mozambique, he heads to Zimbabwe, where the talk is about squatters taking over farms owned by the former white rulers of Rhodesia. Most of the farms that have been “invaded” were no longer productive and many of the invaders blamed the former tenants for not plowing their ground or giving them seeds. He found that most of the whites who remain were making plans to immigrant to Australia.

From Zimbabwe, Theroux heads to South Africa, where he crisscrosses on the nation’s extensive railroads. His trip officially ends when on the Cape of Good Hope, but he spends time traveling around the country and visits Mala Mala, a private game reserve near Kruger National Park. The reserve had ended hunting. The man in charge of it had no problem with hunting as long as the weaker animals were taking, citing the history of big game hunting in Africa as problematic, for the hunters only wanted the best male species, which had damaged the animal gene pool. (413) Of course, hunters weren’t interested in harvesting the weaker animals.

Throughout this journey, Theroux visits various authors from Africa (most of whom he knew already) as well as old friends. He also makes many new acquaintances, from nuns working in the Sudan to three prostitutes that hang out near his hotel in Uganda. Theroux feels that prostitution has increased because of the aid coming into Africa. (202) He has few kind words for tourist in the country, especially those who come just to see the wildlife. He’s also cynical of the work the relief agencies (government, NGOs and religious), referring them often as “agents of virtue in white Land Rovers.” He’s especially critical most of these relief workers are all “short timers” and will soon go home and the problems will continue. (330) His one great hope is that subsistent farming seems to be on the rise, but then he bemoans the fact that relief sent to Africa includes hybrid seeds that do not reproduce. (331) He compares aid given to Africa to Christmas presents that stop running when the batteries die or the thing breaks and no one can fix it. (205) He’s not only critical of those who tries to help, he’s also critical of Africans, where there is no sense of volunteerism (293) and everyone is fatalistic.

This book doesn’t give the reader a lot of hope, but it is an interesting look into the continent. Theroux writing includes great descriptions and often his cynicism seems appropriate. It must be disheartening for in the decades since he’s lived on the continent, the suffering has increased. Throughout the book, Theroux speaks about the books he’s reading and I have now added several titles to my “wish list.” Although this isn’t the easiest book to read, I recommend it, even though I would have liked it to have had better maps.