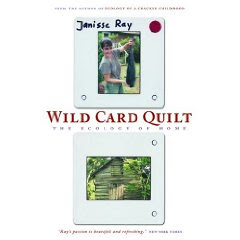 I enjoyed Ray’s “Ecology of a Childhood Cracker” so much I sought out more of her books. She ends her first book with having left home for college in the Georgia highlands. Now, seventeen years later, Ray returns, moving into her deceased Grandmother’s “heart pine” home, a place that might fall in had not the termites been holding hands (19). She’s a single parent with a young son. She has a Master’s Degree and has lived in Montana and Florida. Through essays, Ray gives us a glimpse of her life as she tries to prove Thomas Wolfe wrong and show that one can come home again. But it’s not an easy trip and at times Ray is ready to throw in the towel and strike out for more promising lands.

This book is multi-faceted. On the one hand, it’s about the role “place” plays in our lives and stories. I love her idea of how we learn place from light (275) and how she describes the passing of time by the shadows and the rising and setting of the sun (160f). Reading this, I recalled winters in the longleaf forest that use to be behind the home where I grew up and how the trees would casts such long shadows. The book is also about relationships and Ray writes honestly about her relationship with her parents, her deceased grandmother, Uncle Percy, her son, and a sister who is estranged from her family but who is reunited with them at Janisse’s wedding. The book is also about longing for relationships as Ray mentions going out with another single woman in search of a man (80f), and how she finally found her “man” reading a book at a folk music festival (287f). Some of the stories are a little sappy for my taste, almost like chick-lit, but I enjoyed them anyway. Throughout the book, one learns of the loss the rural south and what it means for the ecosystem. I hope she keeps writing, we need more voices that understand the interconnectedness between the human race and nature.

One senses grace in Ray’s life. I love her story of judging a pork cooking contest. She had not eaten pork in 20 years, but finally agreed to be a judge. A pot of Brunswick stew took first place. (The link is to my recipe for Brunswick Stew. I was using chicken, but pork is also commonly used.) Concluding the essay, she writes:
-


From the pork-cooking contest I learned that many things are above dogma. Respect, for example. Love. The requirements of our place in a community may land us in the middle of odd, funny stories we never schemed for ourselves. What we are asked to contribute may lie outside the lines of what we imagine. Some of our participation we can’t design. (273)

-
Many of these essays elicit a personal response from me. I felt a tinge of guilt when she laments over those Southerners who love the wild having fled the South (189). I’m one of them (although I’ve been adopted by the intermountain west). Thinking back, I was most involved with the Sierra Club when I lived in the South, at a time when the group wasn’t popular, but it seemed to me that they were the only ones in the late 70s talking about the need to preserve ecosystems. I also became nostalgic reading about wire grass and long leaf pines, two species that played an important role in the worlds in which Ray and I had been “raised up.” She speaks of coming into a longleaf forest that “stood out like the Kingdom of Heaven, suddenly tall and very green, praising the sky” (116). Finally, melancholy swept over me when I learned that she discovers her “soul-mate” while he’s reading Zen and the Art of Motorcycle Maintenance. I’ve read that book several times, the first being back in the 70s and never found a nature loving woman with a southern drawl that was interested in the book. If one said anything about me reading the book, it was probably about how motorcycles are dangerous or that Zen is some kind of pagan religion.

Now, for the state of the mule. The mule is fine! Page 43. There is a reason, I’m going off on this silly tangent, I’m entering one of Maggie’s contest! Nothing happened to the mule except that he got wet in a thunderstorm when one of the Tillman boys left him out in front of the church in which he was seeking shelter from the storm. Of course, the mule’s back may have also gotten a little sore. In the darkness, as the boy climbed up on the porch, he thought he saw the devil’s face in the church’s window. He jumped back on the mule and rode home as fast as he could. It turns out a goat was also taking refuge from the storm in the country church whose doors didn’t completely shut. This was one of the “Ray’s” family stories from the past and is found on page 43.
-
For other book reviews by Sage, click here.
For Semicolon's Saturday's list of book reviews in blogs, click here.
Posted by sage at 9:14 AM