Six of us, riding in an overstuffed van, will leave our homes tomorrow for Crane Lake, MN. On Monday morning, in Crane Lake, we’ll meet an outfitter who’ll take us and our gear across a lake and over into Canada, where we’ll pick up three canoes. From there, we’ll head into the wilderness of Quetico Provincial Park for seven days of exploring, fishing, watching loons and moose and, most importantly, pigging out on walleye. I thought it would be fun to show you what I’ll carry on a trip like this and, as I gathered my gear, I snapped photos. First, I should say that since the longest portage we have is 200 rods (roughly a ½ mile), I am going heavier than I would normally do for a backpacking trip. Our portages will require at least three of us to make 2 trips. Believe it or not, I was able to get all my gear (with clothes and sleeping bag in dry bags) into a large backpack. In addition, I will hand carry the ammo can (which is waterproof and adapted as a camera case) and also a fanny pack strapped to the top of the back that will serve as my tackle box. (click on any photo to enlarge) 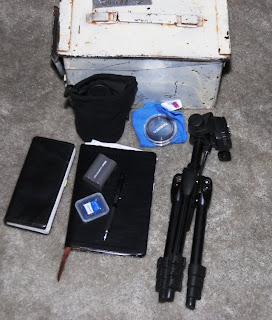 Years ago I painted this ammo can white in order to reflect the sun. It’s the perfect camera case (if you use one, make sure you have a good seal!). In the hot sun of the Southwest, the white color helps to keep the camera from cooking inside the box. That won’t be a problem in Canada. I’ll put everything you see here, except my small tripod (I don’t care if that gets wet), into the ammo box. In addition to what you see will be my camera (which I’m using to snap this picture) and a book (I’ve not yet decided which book). Seen here is a 200 mm lens (my camera will have a 28-55 mm lens), a polarizer filter, an extra battery and memory cards for the camera, lens cleaning cloth, a pocket Bible, a leather journal, a pen and a passport (we’re going into Canada and you now either have to have a passport or a birth certificate). 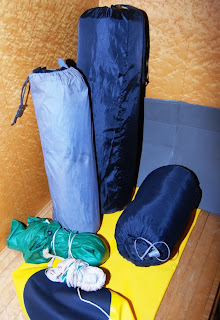 The yellow dry bag will contain many of the critical things in my pack; things I wouldn’t want to get wet (like my sleeping bag). Here you see my sleeping bag, a very thick sleeping pad, a bivy tent, a lightweight tarp with ropes, a hammock and a second pad (green one in the back which is for sitting on in camp or kneeling on when paddling the canoe). If I was backpacking, I’d not take that big heavy pad. I have a ¾ length, ultralight pad that weighs maybe a pound and is only ½ thick… this pad is 2 inches thick and weighs several pounds. It is also long enough that even my toes are able to rest softly at night. 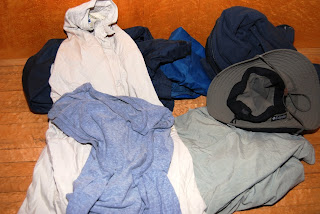 My clothes (which also go into a dry bag), will include nylon zip off pants (zipped off, they make a swim suit), sleeveless t-shirts, long sleeve fishing shirts, rain jacket and pants, a fleece jacket and my famous hat. I will wear a pair of water sandals and will also have a pair of walking shoes in the bag, along with socks, some underwear, and a bug net! The fleece jacket also serves as my pillow. 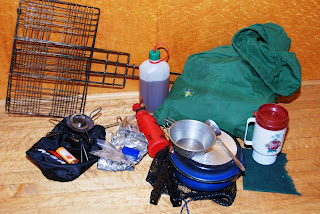 Eating is important. Here is my food bag (notice where a mouse ate into this bag some 20 years ago; I tend not to throw stuff away as long as it still works and everything in the food bag gets stored inside a ziplock bags). In addition, I have my stove (a second fuel bottle is not in the picture), cooking pans (in blue), a basket to grill fish, Sierra Club cup, cleaning pad (soap is with my toilet paper), and a plastic insulated cup to keep my coffee warm longer in the mornings. Oh yeah, there’s a bottle of some liquid corn from Kentucky. It looks like I’ve already been nipping, but the truth is I need to run to the store so I can top it off! 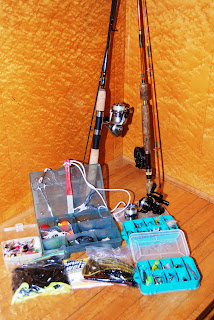 Fishing is also important, especially if we want to feast in the evenings (otherwise, it’ll be rice and more rice). I have two rods; one set up for walleyes, the other is my faithful Eagle Claw pack rod that doubles as a spinning rod and short 6 ½ foot fly rod (I have both an ultralight reel and a fly reel for it). I have a combination of lures, spinners, jigs and hooks for rubber worms and grubs, a handful of wire leaders, a fly box (with flies, small spiders and popping bugs), and a few tools (hook sharpener, small leatherman pliers, tweezers, clippers). Now, I see I need to get my fillet knife (the Swiss army knife that’s in my pocket would butcher a walleye fillet. 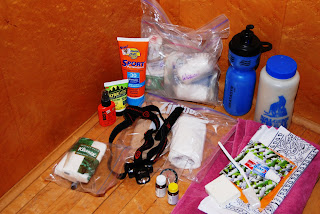 Here’s some of the miscellaneous stuff in my pack: A water bottle with a built in filter, a second water bottle, water purification tablets, bug dope and sunscreen, bandanas and towels, compass (I hope my canoeing partner remembers that he has the map!), head light, first aid supplies (that big bag of junk in the back), toilet paper (soap inside), toothbrush and accessories… In addition, even though we will be supplied they by the outfitter, I’ll tote along my own paddle and life jacket.
-
Ya’ll have fun while I’m gone. I hope to bring back some good stories and great pictures. If I’m not back by September, send the Canadian Mounties out after me!