The Fourth of July and memories of Jesse Helms 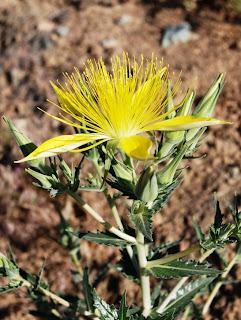 I have no idea of the name of the plant, and it doesn't go at all with my story, but I felt I needed a bit of color. I shot the photo earlier this week while hiking around Virginia City, Nevada.

The fourth was a nice lazy day here in West Michigan. I didn’t do a whole lot. I wrote a blog post, put the new sidebar on my blog (thanks to Ed Abbey’s help), read some, and then headed into town to watch minor league baseball. There I had a traditional fourth of July dinner of hot dogs washed down with a Sundog amber ale (New Holland Brewery). Sorry, no apple pie, but I did have some strawberry shortcake. You can’t get any more American than baseball and hot dogs; unfortunately the West Michigan Whitecaps lost to the Fort Wayne Wizards, 8-7. After the game, there were fireworks. If there had been a few more fireworks in the game, maybe the Whitecaps would have won.

-
The big news from yesterday was the death of Jesse Helms. As a kid, I remember listening to his angry diatribes on WRAL TV out of Raleigh whenever we’d visit my grandparents (luckily for us, WRAL’s signal didn’t make it to the coast). I know the man always maintained he wasn’t a racist, but if it walks and talks like a duck… At the risk of speaking ill of the dead, below is a story I wrote in a post titled “Suppose I’m just a Southern Democrat.” The post was written in 2005, when I had even fewer readers of this blog. It began with a review of the book Whistling Dixie, and went on about my take on Southern politics. The excerpt below has been cleaned up a bit; it’s my most vivid memory of discussing “Jesse.”

During the run-up to the 1988 election year primaries, I hiked the Appalachian Trail. It was a great way to get away from it all and I missed all the news about who was in and out of the campaign during the summer of ’87. That was okay with me. For most of the summer, or at least for all but one day of it, I didn’t think about the elections. But there was that one day in New Hampshire (the state that hosts the first Presidential primary) when another hiker and I detoured down a paved road at the promise of good pancakes served with real maple syrup. The Thompson Maple Syrup Farm was just a half mile or so from the trail and they’d posted fliers to entice hikers. It sounded good and hikers are always hungry, so the two of us hiked to their roadside pancake house and ordered up a couple of stacks. As the proprietor fried the cakes, I read the framed news articles and stuff on the walls and quickly surmised that her husband had been governor of the state of New Hampshire. Trying to keep up the reputation that Southerners are friendly, I asked if her husband was still in politics.

“Oh yeah,” she replied, “right now he’s out trying to jumpstart Paul Laxalt’s campaign.” (Laxalt had been Ronald Reagan's campaign manager and a Senator from Nevada.)

“What,” I asked with a puzzled look, “Laxalt is running for President?”

“Oh yeah,” she said and then asked accusatively, “Who are you for, George Bush?”

Thinking back on this conversation with the vantage of hindsight, the ideal comeback could have been: “I’d be proud to vote for him if he had a vasectomy half-century earlier.” Instead, I just dug a deeper hole when I said, “I suppose if I had to vote Republican, I’d vote for Bush.”

Then she asked me what I had against Laxalt. At the time, I’d never even been to Nevada, Laxalt’s home state (and now my home away from home). Nor did I know at that time that Paul Laxalt has a brother, Robert, who is a wonderful writer specializing in the Basque experience in the American West. So, having shot my mouth off, all I could think to say was, “He’s good friends with Jesse Helms. And Helm’s is an embarrassment to my home state.”

“Oh,” she said with a deep breath, “we do differ.” She said this very slowly and deliberately, each word coming out for emphasis. “We are good friends with Jesse. My husband wanted him to run for President.”

At this point, I realized I’d dug my hole a full six feet deep and if I didn’t shut up quickly it’d become my grave. So I let her run off her diatribe about what’s wrong with the world (which had something to do about there not being enough conservative Republicans) as I tried to eat my pancakes. This lady obviously hadn’t learned the philosophy that the customer is always right. I paid my bill, but I didn’t leave a tip. She’d already given me enough tips and I didn’t think she needed any more.

Two more things about this experience: I’d hiked down to the pancake house with another hiker who was from New Hampshire. We’d meet on the trail that morning and through all of this, she sat in the booth across from me snickering. As we hiked back to the trail, she said she knew I was digging a hole for myself and didn’t know how to tell me to shut up. Secondly, as we were shouldering our packs on the porch, ready to head back toward the trail, a truck drove up and out jumped two men in suits. One was her husband, who introduced us to Laxalt. We shook his hand. Of course, Laxalt didn’t win the primary; I think he dropped out of the primary before I finished the trail. The 1988 election went to our current president’s father (for those of you who didn’t get my comment about a vasectomy).