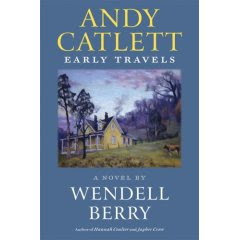 I think Wendell Berry is one of the most talented authors writing today. In his nearly fifty year career, he has published over forty books in three genres (fiction, poetry and essays). Most of these were written while tending a small farm in Kentucky. Andy Catlett is his latest work set in his beloved community of Port Williams, Kentucky, a community that has come alive through Berry’s fiction.

It’s the end of 1943, right after Christmas. Nine year old Andy Cartlett is excited. He’s put on a bus bound for Port Williams, his ancestral home. There, for the next five or so days, he spends time with his grandparents. The Cartlett’s are still living much like their parents and grandparents, depending on oil lamps and wood heat and draft animals. His grandfather along with Dick, meets him at the bus stop in a buckboard, pulled by mules. The Cartletts have never owned a car. While there, the young Andy plays in the fields and woodlots, and sits in a pack house listening to men tell stories as they strip tobacco, preparing it for market. Although Andy doesn’t sense it at the time, the narrator who looks back on the events from the future realizes that the world is changing.

After a couple days at the Cartlett’s, Andy’s Grandfather Feltner picks him up in his car and takes them to their home on the edge of Port Williams. While there, Andy roams the streets of the tiny hamlet, joining the men in the back room of an old store, where they play cards and spin yarns. As with much of Berry’s writing, it’s slow yet very descriptive. It’s a treat to slow down enough to take it all in.

Berry’s favorite themes are here, the passing of one way of life for another. You have no doubt that Berry questions the validity and the wisdom of the newer way of life. He prefers the old ways of home economies. Both grandparents, even though they seem to be different, value hard work and thrift, values that Berry strives to instill into his readers. Another theme is explored through these pages, the theme of race. You can see Berry, through Andy’s eyes, strive to understand the complex relationship between the races in rural southern society.

Berry always tells a good story and Andy Cartlett is no difference. However, if you’re looking for an introduction to Berry’s fiction, I’d suggest first reading either Nathan Coulter or Jayber Crow or perhaps The Memory of Old Jack.

Check out my review of Hannah Coulter (another of Berry’s books). For more infomration on Berry, check out the Mr. Wendell Berry of Kentucky site.