I first came across the writings of Wendell Berry in college. He had just published The Unsettling of America, a collection of essays in which he set out his beliefs about conservation and land use and how to stop dangerous trends in American agricultural and food production. I don’t know what happened to that book; I’ve lost somewhere along the way. A few years later I came across some of his poetry and enjoy a couple of his chapbooks. Then, about ten years ago, I discovered his fiction. I still enjoy Berry's essays and poetry, but his fiction is superb. The writing is simple and clear; yet demands to be read and savored slowly.

Berry’s fiction is set in the town of Port Williams, Kentucky, a fictional town along the Kentucky River where a number of generations of his characters have lived. Over the past ten years, I’ve read all of his fiction. It’s hard to say which are my favorites, but I’d probably have to pick Memory of Old Jack or Jayber Crow. Most tell the story of the town through a member of the community. Hannah Coulter is his first published attempt of writing about the community through the eyes of a woman. Interestingly, one of Berry’s first novels, Nathan Coulter, was about the second husband of Hannah (her first died in World War II). Berry's characters have faults, but because they work together, they overcome them and enjoy a simple life close to the land.

Hannah Coulter grew up poor, but was a hard worker. She married well, as they say down South, to the son of a prosperous and hard working farmer. But shortly after her wedding, the war came. Her husband died died in battle, leaving her with a child. Her second husband, Nathan, survived the war. Upon their marriage, he purchased an old worn-down farm and they spent their lives building it up. The story is told through Hannah’s eyes, after Nathan’s death. None of her children are going to come back to the farm (although there is a hint that a grandson, who did a stint on drugs, might pull things together). In telling the story, Berry lifts up his ideas of land management and offers lots of proverbs as well as some classic tall-tales. Many of these tales are told by Burley, Nathan’s uncle, who points his jokes at himself. Berry draws the stories out as he pulls you in, even retelling old jokes. One of his stories is about Ellis and Burley going on out in Ellis’s Model T, to drink some moonshine. Ellis had just overhauled the car, but had forgotten to bolt the steering wheel back in. Coming through the county on a dirt road, he was flying and Burley kept yelling for him to slow down. Finally, Ellis had enough and said to Burley, "if you want to drive, here." He handed him over the steering wheel. This story explains why a wrecked Model T is rusting away down by a little branch known as "Sand Ripple."

Berry’s stories entertain, but they also make us wonder if those of us who have moved away from the farm and the land have lost something. Over and over again, he finds a way to slip in his vision of a land ethic. People are suppose to stay put and take care of the land and when they do, the land will take care of them. Another value that Berry highlights here and in other stories can be summarized in the old hymn, "Abide with Me." The "members of the Port William Township" abided with each other, rejoicing in the good times and being beside them during the bad (one of Berry’s collections of short stories about Port Williams is titled Watch with Me.

But Berry doesn't only conjure up family memories. He's also a prophet. Sometimes I wonder if his battle is as useless as fighting the wind, but other times, his vision becomes real enough to make me wonder if it isn’t possible and if we wouldn’t be happier living a little closer to the land.

I encourage you to read Berry and would love to know what you think. 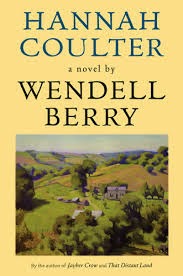