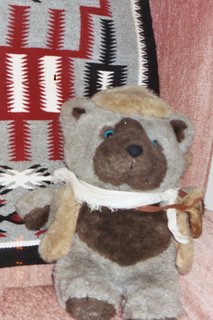 Nevada Jack’s writings often appear in this blog. His preferred genres are satire and parody. I thought I better introduce him. Nevada Jack was given to me by some friends right before I first moved west. At first, I called him "Yukon Jack," after the Canadian-copy of Southern Comfort (both terribly sweet whiskies). But then I was asked to do a program for some kids and decided I could use the bear as a prop, but that some of the kids might know Yukon Jack and it wouldn’t be appropriate. So Yukon Jack got on the wagon and has been known as Nevada Jack ever since. He’s a great companion. He never complains and is always even tempered. I hope all my readers have at least one friend so dependable and stable.

I began to use Nevada Jack as a pen name when I was living in Utah and writing for an underground newspaper and didn’t want my house to be burned down by left-over Danites.

If you look back in my blog history, you’ll find many Nevada Jack articles: