My second day in Scotland begins early with a standard breakfast (porridge) with Ewan.  As he has some things to tend at work in the morning and both he and Hilary had a funeral for a friend in the afternoon, I’m on my own.  I take the bus downtown into Edinburgh with plans to see several things I’d missed during a previous visit (I've done the National Gallery, the Castle, St. Giles and some of the other sites).  My first stop is the Writer’s Museum.  It’s located near the castle, which meant climbing the royal mile from the bus stop.  Although early, the street are teeming with tourists and the bagpipes are out.  I stop to admire the statue to David Hume, the great Scottish philosopher I once had to read.  His bronze statue is all grey and tarnished, except that he is barefooted and his big toe is bright and shiny, as if someone has a toe fetish and his been polishing it (Or rubbing it).  I don't touch the toe and soon the bagpipes are encouraging me to make my way on up the hill.

After wandering around, I finally ask for guidance and find the the narrow street that leads to the Writer’s Museum.  It’s small, mostly dedicated to Sir Walter Scott, Robert Lewis Stevenson and Robert Burns.  Although the home in which houses the museum had no relationship to the authors, its architecture is interesting and there’s a collection of artifacts for each of the big three.  There are also a few other authors who get recognized including J. K. Rowling who completed her Harry Potter stories in Edinburgh.   While there, I discovered the answer for the Ayn Rand nuts who have the bumper stickers asking, “Who is John Galt?” He was a Scottish novelist in the early 19th Century, long before he became one of Rand’s characters.  I come away with even more admiration for Stevenson.  He once said, “To travel hopefully is a better thing than to arrive.”  I agree.

After the writing museum, I walk down the bottom of the castle as it begins to rain.  I find myself in New College’s Seminary, where I looked around a bit but nothing much is happening as everyone is on summer break.  I then duck into a coffee shop to avoid the rain.  When the rain subsides, I walk further down the hill and through the upper part of the Princess Street Gardens, which at this level was mostly forested.  I stop at the walking bridge over the tracks to photograph trains approaching and leaving the Waverly Street Station.


Then I head on to St. Cuthbert’s Church, which a friend recommended me to check out.  Sadly, the church is closed but I’m able to loiter a bit in the graveyard.  At the church’s front, there is a statue of a 19th Century pastor whose piety, according to the words on the monument, must have rivaled Jesus.   This “accomplished scholar and theologian,” served the church for 40 years.  He was “sound in doctrine, earnest in exhortation, in labor unwavering, accuse in argument, expert in business, affectionate, generous, affable and accessible to all.”


Leaving St. Cuthberts, I walk through the lower level of the Princess Street Gardens, which was filled with flowers, pigeons, war monuments and the distant sound of bagpipes.  There was even a monument for the Scots in America who signed up in 1914 to fight in the Great War.  There was another of a Polish soldier and his “pet bear.”  This guy had made his way into Persia after the fall of Poland (and adopted the bear along the way) and then fought with the Scots in World War II.  Gunfire didn’t scare the bear as he would haul ammo to the front lines.   At the far end of the garden, there is a clock done in flowers.

After walking through the park, I come to the Scott Monument (not Scot, but Scott as in Sir Walter) and decided to pay the 5 pounds to climb it.  Supposedly, this is the largest statue to a writer in the world.  It is certainly unique.  Charles Dickens, upon observing the completed monument in 1858 said, “I am very sorry to report the Scott Monument is a failure.  It is like the spire of a Gothic Church broken off and stuck in the ground.”  To ascend the statue, one has to climb through four series of tight circular stairwells.  The first set, with 90 steps, is the only one large enough for two people to pass.  The other three sets of steps have 60 steps and if someone is coming down, one has to back up and let them descend. By the last set, it’s so tight that I have to take off my small backpack and turn sideways.  Once on the top, I’m treated to gale force winds and some serious contemplation as to what might happen if my heart decides to stop ticking at this point.  On a good note, I might have dropped another five pounds from my waist just by climbing the monument.  Seriously, the view of Edinburgh is wonderful and with the wind, I was spared from the sound of bagpipes.

I duck into the Waverly Street station to get a quick bite for lunch, as it was already 2 PM and I’m famished after climbing the monument.  Then, as I make my way back over to High Street, I pass a number of Indian restaurants and am bummed.  The best meals I’ve enjoyed in the UK have always been Indian, instead I had a salad from a fast food restaurant.

My next stop is what is referred to as John Knox’s House.  I quickly learn that Knox may never step foot in.  The house was built by a royal goldsmith and whose son was one of Queen Mary’s men who tried to restore her to the Scottish throne.  While he and his fellow conspirators were held up in the Edinburgh Castle, Knox made his final return to Edinburgh (where he died). If Knox did end up in this house, it would have been where he died.  Knox died not knowing if the Reformation of Scotland was going to succeed, but after the fall of the castle, when most of those supporting the queen were hanged for treason, the Reformation was secured.  This house was purchased by the Church of Scotland in the 19th Century because of a possible connection to Knox, and has been a museum since.  It is also one of the few homes remaining in the old part of Edinburgh that would have been there during Knox’s life.  One of the upstairs bedroom has a fairly risque painting on the ceiling.  I chuckled at the thought of John Knox, on his death bed, having to look up at it.

I continue down the road, stopping next at the Canonsgate’s Church.  According to the agreement tying Scotland and England together is the stipulation that when in England, the royal family will worship with the Church of England and when in Scotland, they will worship with the Church of Scotland (Presbyterians).  Canonsgate is the church just up the road from their Hollyrod Castle and their place of worship when in Edinburgh.  The graveyard around the church houses the remains of a number of notable deceased from Edinburgh, including Adam Smith, the economist.  Even more interesting, to me, was the grave of Clarinda, the wife of the Honorable Lord Craig.  Although Craig has a nicer monument and a title, Clarinda is better known due to having had a relationship with the poet Robert Burns.  Nobody comes to see Craig’s grave anymore, but Clarinda is remembered in Burn’s poems and continues to have flowers brought to her grave.  I’m pretty sure Canonsgate isn’t the only church in Scotland that holds the remains of a lover of Bobbie Burns.  According to legend he got around. 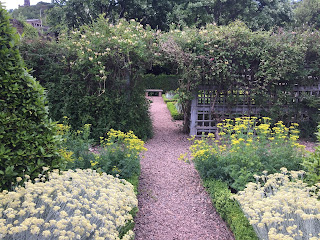 Next stop is the Dunbar's Chase Gardens, just a few doors down from Canongate Church.  At the bottom of the hill (and just before you'd begin climbing Arthur's Throne, is the new Scottish Parliament building which stands in contrast to the older buildings in this section of town.  I walk around a few minutes before heading back to where I can catch a bus back to Ewan’s home.

It was the last day of school before the summer break.  I arrive in time to go with Ewan and Hilary to their daughter’s “Improv Show” for the end of the semester.  The youth, mostly late elementary school age, were given situations and had to act them out on stage or to guess what another was acting out.  There were lots of jokes about Theresa May and a demon (aren’t they the same thing, one student asked) and even an improv with Donald Trump as the butt of the joke.  My favorite line of the night came from Ewan’s daughter.  She was to sit on a park bench next to another person and “drive them away.”  She started her spiel by seductively asking “Did it hurt when you fell from heaven?”  The boy was soon running for his life. 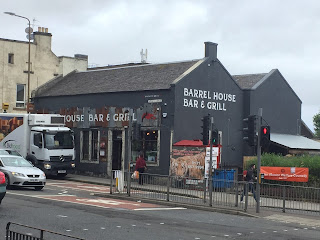 Hilary has an engagement that evening, so after the play Ewan and I head to the Barrel House for dinner.  It’s a local establishment, within walking distance of their house.  Ewan and Hilary’s son works there when he’s home from college.  The evening turns out to be an international experience.  The proprietor is from Australian, but loves New Orleans cooking so they have Jambalaya, Gumbo and Southern Fried Chicken on the menu, along with a lot of American beers and bourbons.  I stick with Haddock, Chips and Peas and a bottle of a local IPA called “Loaf of Life.”  While eating, a very good Scottish country-rock band takes the stage.  Among the songs they played were Cab Calloway’s “Minnie the Moocher” along with the blues tune, “Train, Train.”  At least I’m not having to suffer more bagpipes!

Afterwards, I hit the sack early, humming “Train, Train.”  In the morning, I’m catching the train for Glasgow and then on to Oban, as I head to Iona for a week.