X is for the X in the summer sky Now for the promised post that many of you have been waiting for...

If you look overhead (from the northern hemisphere) during the summer, into the heart of the Milky Way, you might be able to make out an X or a cross in the sky.  X is today's letter in our A-Z Challenge.  This "X" is Cygnus, the swan, although it is also called “The Northern Cross.”  Although larger than its companion constellation, the Southern Cross, it’s not as famous possibly because Crosby Stills and Nash never sang a song about it. 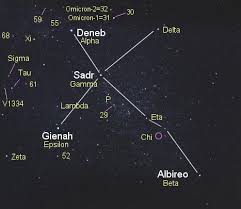 We’ve heard a bit about one of the stories that deal with Cygnus when we looked at Gemini (so you might want to look back and review).   If you remember, Gemini were the children of the affair between Jupiter (or Zeus) and Leda.  Leda, at the time, was the wife of the King of Sparta and Jupiter, from his all-seeing perch above earth, spots her having a bath.  Wanting a closer look, Jupiter changed himself into a swan and swam over to Leda.  The beautiful queen found the swan so lovely, she stoked his neck which drove Jupiter mad with lust.  He turned back into himself and they had sexual relationships that evening.  That same night, Leda, also had sex with her husband and somehow sperm from both found their way into Leda’s eggs.  Nine months later, she give birth to the Gemini twins, one who was immortal, thanks to his father being a god.  The other child was mortal, thanks to his dad being just a king.  So today, during the summer months, the swan is overhead waiting to seduce another beauty…  Or maybe this nonsense should just be called a “Midsummer Nights Dream.’ 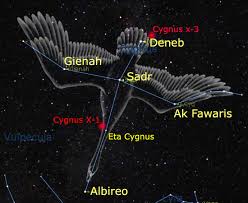 There are other legends about Cygnus, but this one involved our old friend, Jupiter.

As for Crosby, Stills and Nash, I love the song, "Southern Cross," Anytime you can mix together sailing, the stars, and lost lovers together, I tend internalize the message...
.
When you see the Southern Cross for the first timeYou understand now why you came this way'Cause the truth you might be runnin' from is so smallBut it's as big as the promise, the promise of a comin' day
-Crosby, Stills and Nash, 1982
Posted by sage at 5:43 AM