Sliding on the Edge and a Giveaway from the Chubby Chatterbox 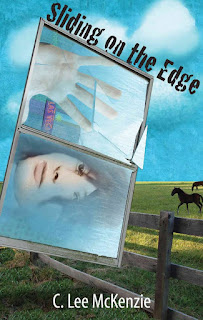 C. Lee McKenzie, Sliding on the Edge (Westside Books, 2009).  I read this on my iPad using a Kindle app.

Shawna is a tough sixteen year old, at least on the outside.  She is capable of surviving the streets of Las Vegas and the abusive boyfriends of her narcissistic mother.  When her mother flees town with her newest lover, on the day the rent is due, Shawna wakes to a bus ticket, a $100 bill and a note to go to her grandmothers in Central California.  There, she will be where her mother can find her when she gets her life back together.  Having never met her grandmother, Shawna reluctantly decides to take the trip.  Having been disappointed all her life, Shawna has developed a protective façade that pushes others away.  In a similar way, her grandmother Kay also has a habit of pushing people away.  The two leading characters in the story have sad memories that each must deal with. But Shawna issues are deeper.  Having pushed everyone away, she deals with her deep pain by giving into the “Monster” and cutting herself with a razor blade.  Shawna and Kay need the other.  Kay, by taking care of Shawna, is able to finally put aside the tragedies of her past as Shawna, with the help of her grandmother and an old horse, learns to trust.   The book is told from the point-of-view of both characters: Kay and Shawna.

I found myself deeply pained by the events of Shawna’s past.  No child should ever have to deal with a mother who used her daughter in her schemes to obtain what she wanted in life.  As we read the stories, we learn the two had worked together as petty criminals on the streets of Vegas.  Moving to Central California, where she surprises her grandmother, Shawna finds herself in a strange new world.  This is the world of horse farms and high schools where girls have sleep-overs.  It takes a lot of patience but by the end of the book, after she realizes she doesn’t want to go back to her mother, things are looking up for Shawna.

I have often enjoyed the young adult works, especially the works of Gary Paulsen and Gary Schmidt.  However, they write stories about teenage boys.  Reading about a teenage girl, in a book written for girls is a little different.  I was curious to learn what goes on in someone’s mind that causes them to cut themselves.  As a book of fiction, this is not a handbook about the practice and how to stop it.  But I can see how one can come so jaded about life that they resort to such drastic measures to battle the pain.

Ironically, I read two books about teenage girls last month.  The other, which was also very good, was Anthony Doerr’s All the Light We Cannot See, which is about a French girl who is blind during the Nazi occupation along with a young soldier in Hitler’s army.  It, too, was a good read and I would recommend them both.

And now, for a give-away:

Stephen Hayes over at the Chubby Chatterbox  is feeling generous.  If you don't know him, I encourage you to read his humorous blog.  If you are down and need a good laugh, be sure to check out his blog.  The sun will start shinning or at least the clouds won't seem so overwhelming.  Stephen is a retired commercial artist who also taught art on the university level.  For a giveaway, he's offering up a painting he did in one of his classes.  The colors in the painting would go lovely in my living room, so don't go signing up for the giveaway so I'll have a better chance at winning.   Okay?   It'll save me some decorating dollars and if it doesn't go, it'll help me get off cheap for Christmas... Now, seriously, check out Stephen's blog and his giveaway.  A photo of the painting: