An afternoon paddle to Raccoon Key

Taking advantage of the longer day thanks to daily saving time, favorable tides and warmer weather, I launched my kayak on Sunday afternoon at the Delegal Marina and paddled with the ebbing tide toward the open waters of Green Island and Ossabaw Sounds.  You can click on any of the photos to enlarge them.

I haven’t gone very far before I notice a pair of osprey building a nest on a navigation marker.  As I paddle closer, one takes off, only to come back a few minutes later with another stick.  When I get too close, they begin chirping, obviously upset with my presence.  I continue paddling, leaving them to build their home.

At the mouth of Delegal Creek, I paddle around the east end of Green Island Sound and across the wide mouth of the Vernon River.  This is my first open water paddle since the fall and I am always conscious about how open the water is looking out to the sea and how small my boat appears in relations to the water.  However, I'm not nearly as small as the ducks which bob up and down with two foot waves that break across my bow. With the outgoing tide going against the offshore wind, waves move inland keeping me from paddling straight across the channel which would have allow the waves to dump water (and possibility roll me) if I was parallel to the swells.  Instead, I take the waves at a forty-five degree angle, toward the mud flats on the east end Raccoon Key, my destination. 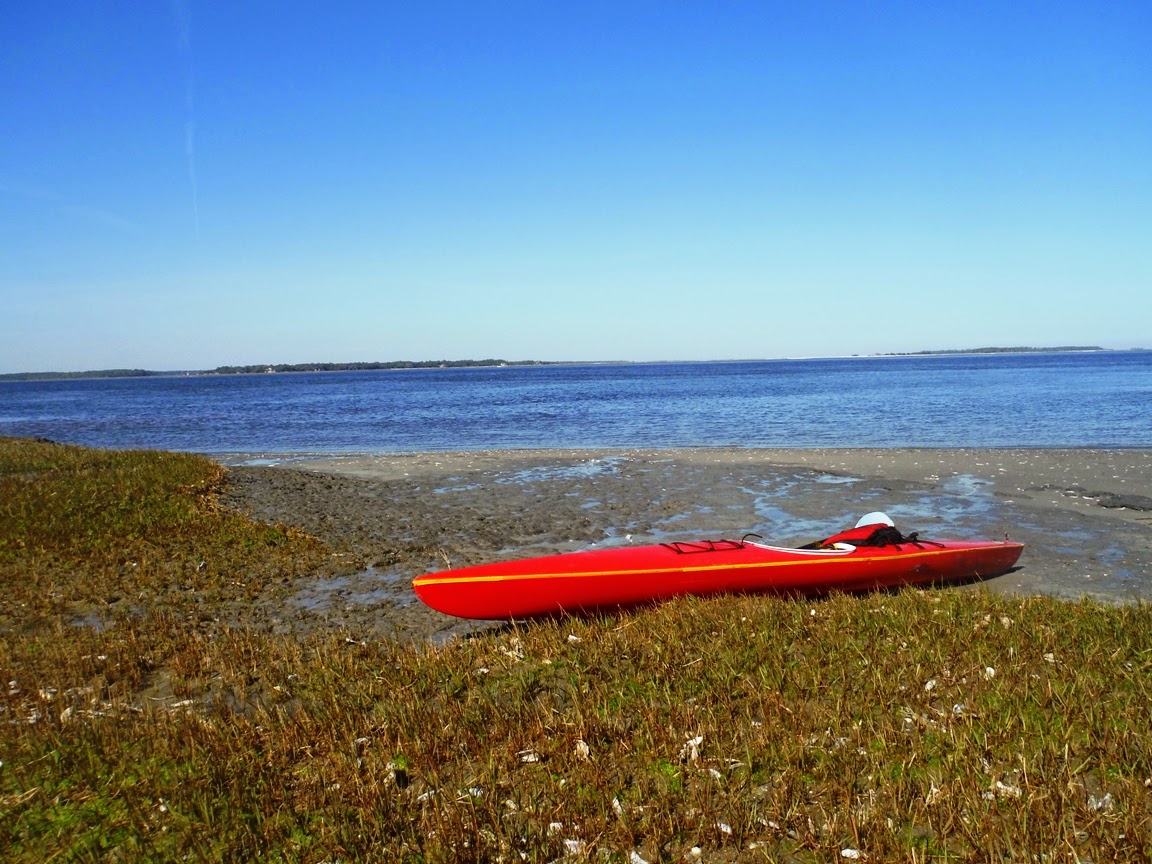 Arriving at the key close to low tide, I pull my boat up on high ground and find a small sandy beach where I drop a mat and enjoy the perfect weather.  It’s warm but not hot and there is enough wind to keep the sand gnats at bay.   I read an essay about exploring a cypress swamp in Florida by John Lane and the look to make a few notes in a journal when I realize I don't have a pen.  Instead, I take a nap behind the white noise of waves and gulls.  Thirty minutes later, I get up and explore part of the key and am amazed at the number of dead horseshoe crabs that appear to have been washed on shore and then abandoned far from water when the tide ebbed.  American oystercatchers and a few other shorebirds run up and down the beach at the edge of the water.

Low tide was a little after five, but I wait till nearly six before paddling back across the sound.  The waves have died and I make good time as I head for the mouth of Delegal Creek.  From there, with the tide running strong, it's an easy paddle back to the marina.  There was only one osprey at the nest, when I float pass it.  By 7:30, I’m at home, hanging my kayak in the garage and hungry for dinner.
Posted by sage at 8:13 AM