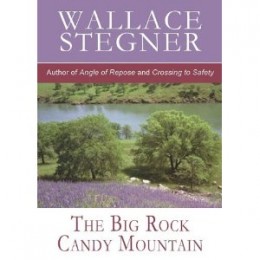 Wallace Stegner, Big Rock Candy Mountain, 1943.
The Big Rock Candy Mountain is often described as Wallace Stegner’s most autobiographical novel.  But it’s not just an autobiography, it’s a family history.  The book tells not only the story of Bruce Mason, but also that of his parents (Bo and Elsa), and his older brother (Chet).  The book begins with Elsa fleeing her father’s home, after he’d married her best friend.  She heads to her uncle’s in the Dakotas.  Taking the train, she sits by a dirty window, watching the telegraph lines dip and rise like swallows, her stomach also dipping and rising as she thinks about the home she’s leaving.  From the beginning, Stegner creatively uses words to describe the landscape and what’s going on within his characters.   Staying with her uncle, Elsa meets Bo, a former baseball standout who is running an illegal bar.  Bo had left home when he was 14.  He later persuades Elsa to marry him.

Bo is a dreamer who is always envisioning making it big.  With his wife and later with two boys in tow, they travel all over the western United States and Canada.  At times, Bo finds it necessary to abandon his family, leaving them to their own resources, but when things are better he reunites with them.  Along the way, both boys learn to hate their father.  He’s never content and nothing is ever good enough for him.  He’s strict on his boys, insisting that providing them a good living is all required of him.  But it’s a living on the run.  At times he tries to make a honest living by running a hotel or farming or running a casino in Nevada, but when things get shaky, Bo returns to bootlegging.

As the boys mature, they find themselves in Salt Lake City.  Chet, who is a promising baseball player falls for a local woman and against his parent’s advice, marries her.  As a young man, when Bruce is away in college, Chet dies. Leaving Salt Lake, the family ends up in Nevada, Bo a part owner of a casino in Reno and the family living in a summer cottage on Lake Tahoe.  But then cancer strikes Elsa.  They move back to Salt Lake City where she dies, setting up a confirmation between Bruce and Bo.  The two part ways and Bruce heads back to school.  Bo is no longer the young man he once was and is spinning out of control.  He has invested most of his money in a Nevada mine that bleeds him.  He has a woman who, when he begins to lose everything, leaves him.  At the end of the book, Bo kills her and then himself, leaving Bruce as the only survivor.

The story line in the book often jumps over years, settling in on particular events in which the author creates detail vignettes that together create the story of the Mason family.  Stegner tells us of the hardships of dry land farming in Canada, of the influenza epidemic, of prohibition, and of Reno during the early years of legalized gambling.  Like a long-winded preacher who you think is about to bring his sermon to a close, only to go off in a new direction, Stegner often inserted a summary that made me think he was wrapping up the book, only to pick up on a new thread that pushes the story into a new direction.  Yet, he tells these stories with such detail descriptions that catches the essence of the event and the place, which causes the reader to be drawn back, again and again, into the story.

I had a love/hate relationship with this book.  No doubt it is an American classic and should rank a spot on the shelf next to The Grapes of Wrath and Huckberry Finn and On the Road as examples of how the West and a wanderlust desire is engrained in our psyche.   This book is also a case study of the failure of the rugged individual to find happiness.  The way the book is written, one is drawn into the love of the west as felt by Stegner.   However, it is also a book that could have used some additional editing.   I listened to the unabridged audio edition of the book, which was nearly 26 hours in length.