I am staying busy and not having the time to do much writing these days and I feel guilty for not checking on everyone's blogs like I should.  I keep saying that things will lighten up, but I don't see that happening until mid-summer (and we'll see what happens then).  Anyway, I still read and recently wrote this book review of one of my favorite topics--trains.  The photo on the right I found recently when looking back at photos from the early 90s.  I was trying to find a photo of a friend's boats and came across these tracks, taken near Wyoming, NY, if I remember correctly.  The tracks are not straight, but are used, only the trains are limited to 10 mph.

I picked up this book at a used bookstore right before Christmas and thought I’d read it on my train trip out west after Christmas, but forgot about it and only recently did I get around to reading it.  I am still not sure what to make of Vollmann’s ramblings.  This book is a collection of Vollmann’s memories of “unauthorized” rail travel, loosely complied into chapters of similar themes.   In his travels, he’s searching for “everywhere” or the mystical “Cold Mountain,” a place named by a Chinese poet. 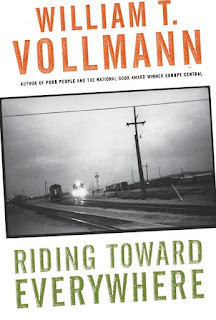 Vollmann is a modern day hobo, albeit a part-time one.  Being a part-timer has its advantages such as credit cards and the ability when things get too uncomfortable to hop off near an Amtrak station and buy a ticket home or to check into a hotel, clean up and head out on the town for the evening.  It also allows him the luxury to travel to locations to begin his travels such as when he flew to Cheyenne, Wyoming to hobo back to California (he only made it to Salt Lake City, before flying home).  Jack London, in his 1893 hobo expedition across the country, had recalled that Cheyenne was a tough city to hop a freight train and Vollmann decided to see if anything had changed in the past century.   Vollmann often draws upon the hobo writings of London and Jack Kerouac as well as the writings of Mark Twain, Thomas Wolfe and Ernest Hemingway.

All of Vollmann’s travels are in the American West.  The way he describes the smell of sage or the stars on a western night makes me homesick (for my adopted home).  Some of the travels he made have been over tracks that I’ve covered (but I was a paying passenger in the comfort of an Amtrak coach).   He begins telling about traveling the coastal route that runs from Oakland to Los Angeles, a route that left me with bittersweet memories (see my blog post).

As I would expect with hobos, Vollmann seems to have a problem with authority, whether it is security forces at airports or “railroad bulls,” and he often slips in digs about them.  The railroad has never taken kindly to people hitching rides on trains, but in the day of terrorists (and few open boxcars), it’s even worst.  However, Vollmann leaves the reader with the impression that the “bulls” at Burlington Northern’s yards are more lenient than those at Union Pacific’s yards.   The scene Vollmann recalled of hopping  a freight with two of his friends, each of whom had  a cell phone and kept the other abreast of the location of the security men and the places to hop onto an open box car made me wonder if they should really be called hobos.

“There are two things that put a man on a train,” Vollmann quotes a modern day hobo, “a woman or a war.”  Vollmann discusses the mythic women hobos, as well as discussing the topic of woman among hobos and how they depict the female gender in graffiti inside box cars.  He also gives insight into a number of modern hobos.  There are two types of hobos, according to one of Vollmann’s hobo confidants, those who have nothing and those who want to be on the rails.  Obviously Vollmann and his friends fell into the second category.  Of course, did Vollmann really ride the rails as he provides a "legal disclaimer" at the beginning of the book, suggesting that the stories are really hearsay and his photographs are really drawings.

A hobo has never had a glamorous life, but it has to be tougher today.  There are few open box cars in which one can wedge the door open and enjoy riding the across the country.  Most of Vollmann’s rides were on the “porches” at the end of grain hoppers, a seat that’s open to the elements and visible to security men.  Furthermore, trains today go further without stopping, requiring the modern hobo to be prepared with water and food and warm clothing.

If you enjoy trains and have ever thought about what it would be like to hop a freight, this is a good read.  I would also recommend reading Jack Kerouac’s  On the Road and Dhama Bums and Jack London’s The Road.