What happened?  I had this posted this two days ago.  Yesterday, I was having problems with blogger and couldn't post any comments.  This morning I notice this post was missing (along with its comments).  It was in the "edit stage" (without photos).  It's like Blogger went back three days...  I lost the post and the comments on this post (and I think I lost a couple of comments from other posts).  So here, I am posting this again!


I first read about Robin Lee Graham in National Geographic. As a kid, in the late 60s and early 70s, his story of sailing around the world excited my imagination and opened my mind to the possibilities that had previously not existed. Recently, in reading Unsinkable, the story of Abby Sunderland attempt to sail solo and no-stop around the world, I thought about Graham’s story and was reminded that in addition to the three National Geographic articles, he’d written a book. I ordered a used copy from Amazon and, a few days after it arrived, I finished reading it. Had I not been so busy, I’d finished it the day it arrived. I was quickly drawn into the narrative and many of the photos I remembered from those old dog-eared magazines.


At the age of 16, Robin Lee Graham set out to sail around the world in a 24 foot sloop named “Dove.” It was 1965. Five years later, with the world having changed, he returns, becoming the youngest person at the time to sail solo around the world. His itinerary reflects some of the world’s changes. Originally he planned to go through the Suez Canal, but it was closed after the 1967 war and Graham found himself heading around the horn of Africa, where he witnessed firsthand the impact of apartheid. Yet, he also has fond memories of South Africa and its people. It is there he and Patti (an American he’d met in the South Seas) marries. As he ends the journey, Patti is the pregnant and the book ends after the birth of their first child. 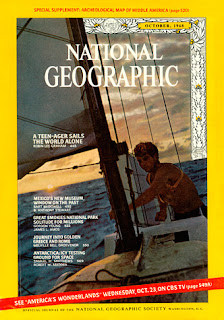 This book is intensely personal. Graham writes about the loneliness he feels and his struggle to leave port after having enjoyed time on the land. It is the encounter with different cultures that makes this book so fascinating (and sets it apart from Unsinkable). Like Sunderland, Graham grew up on boats and had sailed with his family to the South Seas when he was younger. Graham also writes lovingly about Patti (after meeting her) and is excited about their upcoming child. In many ways, the book is highly idealistic, which was a lot like middle-class America in 1965. The world was filled with possibilities! Graham sets out to sail the world with pocket change and without the benefit of a radio or electronic communications (In South Africa, he installs a two-way radio). He navigates with a sextant. He finds he has to stay up on lookout at night, especially in shipping lanes, and goes for days without much rest. He relies of his own ability to make repairs. And he reads! When he gets back, he notes that although he’d missed much of high school, he could ace any class on geography or literature but he might need help in mathematics (which is doubtful as he was able to do the calculations required to navigate without electronics).


One thing I didn’t remember from the National Geographic articles was Graham’s religious conversions (maybe it wasn't there). He begins reading the Bible in the Galapagos Islands and after coming back to the States he and Patti (he’d earlier described them both as pagans) become a part of a church. His conversion wasn’t instant or rapid, but a slow process. In his journey, Graham had learned that he didn’t need a lot to be happy. He learned to appreciate how unique and wonderful people are around the world. And he learned to appreciate God’s creation.


In a way this book seems way too idealistic, but reading it gives me hope and reminds me of a time before I was so cynical! It also reminds me of how fresh and exciting young love can be, for as much as this is a book about sailing around the world, it’s also a love story between Graham and Patti. I recommend it.
Posted by sage at 1:14 PM