Personal Thoughts on the Ultimate Punishment 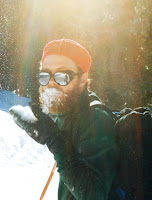 This photo has nothing to do with this post. It's just an old photo of me cross-country skiing in the Sierras (and eating snow). The photo was taken in Jaunary 1989 on Kodachrome and is a digital copy of the slide.
I saw them just a few times that summer. They’d be walking to the mailbox or in their car turning into our shared driveway. I’d smile and wave and generally they’d wave back; I don’t think we ever spoke. They seemed sad, just a remnant of a family who lived in an old farmhouse behind me. They all seemed older than their years and probably were. I remember an older girl or more correctly, a young woman. She might have been attractive, had it not been for the gloom on her face, slumped shoulders and downcast eyes. I wondered if she was the one.

In the summer of 1984, I was director at Camp Bud Schiele, a Boy Scout camp located in the foothills of the Appalachians. The land that made up the reservation had originally been several dairy farms. They hadn’t yet built the director’s cabin, so I lived in a small house that had originally housed one of the dairy families. Behind me, in what had once been a farmhand’s house lived this family in a house they rented from the scout council. The summer camp area was about a mile and a half away, across a broad valley dissected by the tracks of the Clinchfield Railroad.

Right before I moved to camp for the summer, I had a conversation about the family with Tony, the camp ranger. We were in the former milk bar which had been converted to the camp’s shop and tool storage shed. A ranger from another camp that was a few miles from us was also present. He was either borrowing or returning some equipment.

“They need their privacy,” Tony said. “But keep your eye out for them and call me and the sheriff if anyone bothers them.” He then told me the story. The father of the family had recently been executed at Central Prison in Raleigh. If I remember correctly, his was the first execution in North Carolina following the reinstatement of the death penalty. A few years earlier, his daughter had come home late from a date. He’s taken shots at her boyfriend and when the law showed up to find out what was going on, he shot and killed two officers.

I made some quip about how his death wasn't going to solve anything. This was interpreted as a liberal cliché by the other ranger, who immediately challenged my statement. We entered into a rather heated argument over the necessity of capital punishment. As in most such arguments, neither one of us changed our minds. If I remember correctly, Tony didn't say much, just listened and shook his head.

I became an opponent of capital punishment fairly early in my life. At some point, I remember watching a movie about an innocent man being executed and it seemed that the only way to make sure that doesn’t happen is to end such punishments. Although I was only 11, I was relieved in the late 60s when the Supreme Court instituted a moratorium on the practice. My first political arguments with my dad were on this topic; he felt the Supreme Court’s decision to be foolish. But what sealed my position on capital punishment came when I was in the eighth grade. I was a student at Roland Grice Junior High School and my girlfriend attended Sunset Park Junior High. We knew each other through church. During the week, we’d talk by phone. We both had spies at the other school, snitches more than willing to tell tales. One day I confronted her about a guy she’d been seen frequently hanging around with and she snapped back, “What are you going to do, put me in the electric chair?” Ever a smart-ass, I responded, “Lucky for you, I don’t believe in capital punishment.” Then we forgot all about the allegations of her unfaithfulness and began to argue about the merits of the death penalty. She was in favor of it and I was against it.

In time, the reasons for my position against capital punishment changed. I began to base my arguments on moral and theological grounds, centering mostly on the need for society to set the example about the value of life. For the same reason, I have also been against abortion even though I’m horrified at the possibility of being identified with the pro-life camp, most of whom aren’t really pro-life, just anti-abortion. But that’s another topic.

Throughout my life I have had many encounters with those dealing with capital cases. When working with the Scouts, one of my district chairmen was an attorney. The country didn’t have a public defender, so the task was rotated among those who practiced criminal law. By the luck of the draw he was assigned to defend a young man who’d been charged with a double murder, the deaths of his girlfriend’s two children. There was little doubt of the defendant’s guilt as the bodies were discovered in his trunk. It was anguish to have to defend such a man and a year or two later, he quit practicing law.

Years later, when living in Utah, there was a horrible murder. A young man brutally attacked his ex-mother-in-law in front of his children. The victim was a respectful member of the community, a Paiute social worker who was seen by many within the tribe as a leader and nurturer. Again, I was friends with the attorney who had the public defendant contract for the county. It was his first capital case and we talked several times about it (enough so that when the case did come to trial and I was one of the 120 people in the jury pool, I was quickly dismissed!). Again, there was little doubt of his guilt and the defendant was found guilty and sentenced to death. When his attorney accepted the case, he confided to me that he had no problems with capital punishment. He admitted he’d never really given it much thought, but during the trial, as he got to know the defendant, he struggled with his beliefs. Although the defendant was guilty, he was still a human being.

I attended the final arguments for the sentencing phase. Outside the courthouse, a circus was on-going. The victim had been a member of the local band of Paiutes and many members of the tribe were out with signs asking that the defendant “fry.” The defendant was also a Native American, but a Hopi. Far from his native land, he had no supporters. I was sickened as I cleared security at the courthouse, wondering if those picketing would feel better once they obtained the revenge they sought. “Vengeance is mine,” say the Lord, but many people things the Lord can use a helping hand. The defendant, in what was an agonizing decision for the judge, was sentenced to death.

I saw that ranger from the neighboring camp, the one I’d argued with over capital punishment, once or twice more that summer, but the topic never came up again. A year or so later, two young men turned up missing and the fingers all pointed to him. Their bodies were found buried near his home. He was tried and found guilty and sentenced to death. I have no idea what ever came of the case, as I left the area shortly afterwards. But I’ve wondered about him as well as I’ve wondered whatever became of that family that lived in the house behind me. And yes, I’ve also wonder what happened to the mother of the two children, the wives and children of the law officers, the parents of the two young men and the daughter and grandchildren of the Paiute social worker. Did these additional deaths bring any peace?
Posted by sage at 8:44 AM