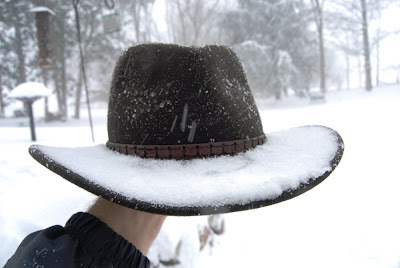 The storm Ed Abbey wrote about on Thursday arrived here early Friday morning. Instead of the ice that was being called for in Iowa, we got snow and lots of it. At 4 AM, the winds were blowing and we’d already received an inch or so of snow. By 6, the snow and blowing wind had filled in the sidewalks and driveway. It kept snowing hard. The snowplow didn’t arrive till 10 AM, at which time we had 6 or 8 inches. The snow kept coming and by the time it ended around 1 PM, the driveway had another 5 or 6 inches. In all, we received about a foot of snow, on top of the six inches we’d gotten a few days ago. And the weather gurus are calling for another 6-8 inches tonight and tomorrow morning. And more again on Tuesday…

During the storm I went out to shovel out a path around the doors so that the dog could go his business and a path to the driveway (gotta be nice to the paperboy and mail-lady). In the five minutes I was out in the blowing snow, my hat received this much snow. I decided I needed to take a picture of it. Notice too the snow streaking down between the hat and camera.

I went out and skied a bit later in the afternoon. As I'm heading South in a few days, I better enjoy the snow while we have it (but I don't have much time as I have lots to finish before I leave). How are your Christmas preparations comings?
Posted by sage at 7:52 AM