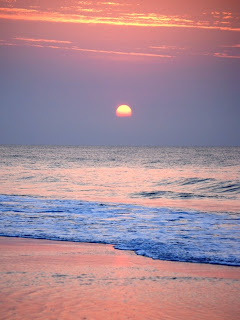 I’ve been home for less than 48 hours and it has been anything but settling. Bands of severe storms have crossed Lake Michigan providing wonderful shows of lightning that plays havoc with our electrical grid. In addition, these storms brought with them a deluge. In the early hours on Sunday morning, the skies open and in a couple of hours we received over five inches of rain. Yesterday, we got another inch or so. We’ve been spared the hail. Late yesterday evening, we lost power again—and it was off till 2 AM. It came on long enough for me to awake to the running of the bathroom fan. I got up and started to turn off lights.

I was in the kitchen, just a few minutes after the power was restored when I saw the fireworks display of the year. I heard a buzzing sound and the walls begin to reflect a red, yellow and blue glow. As I turned around, I heard a bang and saw a fireball that was higher than the trees (which are probably 60 feet tall). Then things buzzed again and another fireball and all was black. I grabbed a flashlight, slipped on flipflops and walked out the back door to see if there was a fire. From the driveway, I caught a glimpse of down power line at the property edge and I froze (not wanting to walk closer in wet grass!) Luckily the cell phone system was working and I called 911. While talking to them, a policeman arrived (he’d seen the explosion from a mile away and had thought something had blown up. It turned out a limb had fallen over a 4800 volt transmission line, knocking out the substation and sending the town further into the darkness. My power finally came back on around 11 AM this morning (there are benefits to living near the hospital). Downtown and my office is still in darkness and others, especially those in rural areas, may have to wait to Tuesday or Wednesday before their power is restored.

Before the line of storms rolled through yesterday, I’d planned to post a story about the beach… that’ll have to wait. I sure wish I could have gotten a photograph of that electrical show last night, but at the time, as I ducked, taking photos was the last thing on my mind. But here are two photos from the beach. The first is of sunrise behind a cloud bank off Wrightsville beach, another of me lounging in a warm tidal pool on Masonboro Island. 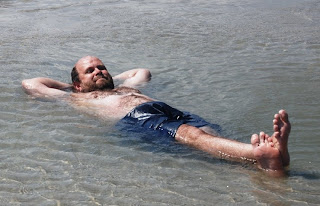