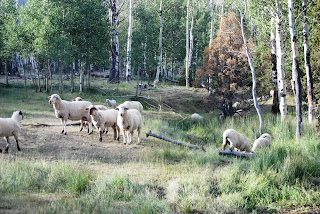 Today’s Sunday Scribbling prompt is “Phenomenon.” A phenomenon is something that can be observed—a meteor, a hot spring and the scent of sage falls into this category. But I don’t think the ways of a human heart is a phenomenon. We don’t know what goes on inside. This is the first of a series of posts I hope to get around to writing, featuring my favorite hot springs… This hot spring is called the Sheepherder’s Bathtub; however, I never saw any sheep in the area even though there are plenty of sheep in the hills and mountains around this valley, up where the grass grows in abundance. Although I have many slides from my time in Idaho, but don’t have any of them copied digitally. I took the picture of the sheep several weeks ago when I was in Utah.
---


It was just a hole in the ground nestled within some aspen and pines on the edge of a broad valley covered mostly with sage. You couldn’t even tell where it was unless you were right on it. The only sign that there was something special about this place was a pull off from the highway, just large enough for a few cars to park, and a dirt path that ran through the sage to a place the locals called the Sheepherder’s Bathtub. As hot springs go it wasn’t much, twenty, maybe thirty feet in diameter and three or so feet deep, but filled with very warm water with just a hint of sulfur. I learned about it from a local, the first summer I directed a nearby camp. And for two summers, the spring served as my own private retreat. I never saw another soul there except for those I invited. Summer twilight last late into the night in Central Idaho and I’d often head to the tub around 10 PM, just as light began to fade in the valley. For an hour or so I’d lay in the 100 degree water, the back of my head resting on rocks, watching the summer stars emerge as I soaked my troubles away.

I visited the tub one last time the end of August 1990. It had been raining for nearly a week, which brought out the scent of sage. Rachel’s sister, with whom I’d enjoyed a whirlwind romance that summer, was with me. We soaked in nature’s own hot water and talked till midnight, observing the movement of the stars and watching for meteors. In the high mountains, far from city lights, meteors are more vivid. Each time one streaked across the sky, we’d make a wish. I don’t know what she wished for. You can’t tell what you wish for, or it won’t come true, or so some say. Looking back, it didn’t matter. I kept my wishes a secret and they still didn’t come true.

The next afternoon we hugged in the camp’s parking lot and then got into our cars and drove off. I stopped after crossing the plank bridge over a fork of the Wood River to walk back and lock the gate, my last responsibility for the summer. Leah kept going; we never saw each other again. I think it was C. S. Lewis who said we’ll spend a good part of eternity thanking God for prayers not answered. Maybe so, but at the moment you realize a dream is lost, you feel as chilled as I did in the breeze the evening before. Prune-liked and water-logged when we finally crawled out of the warm water, we were quickly cooled by the wind and the night air and held each other close for warmth as we walked through the sage and back to the car.
Posted by sage at 6:38 AM