Wicked Seductions: A Sunday Scribbling along with an update 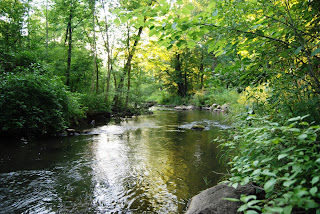 I know I’m two days late for Sunday Scribblings, but I have good excuses. I’ve been busy. This past week’s Sunday Scribbling prompt was “wicked,” and I’d had many ideas as it’s such a playful word and some folks say it’s a field I have experience in. I wrote this piece this morning, after my little adventure last night. My parents left yesterday morning and last night I fixed a Dutch oven dinner for a board that I sit on. We ate at the park down by the river and after everything was cleaned up, the water was just too enticing. I took out my flyrod and put on Tevas (sandals that can get wet—I was already wearing shorts) and heading into the water for a little relaxation. I caught five fish in about 15 minutes, three of them from the same hole, as I describe below.

The sun had dropped out of the sky and darkness was descending upon the river when I spied a long parallel to the other bank. “One more hole,” I thought, “then I’ll pack it in.” As I moved into the middle of the channel, onto the sandbar covered with grass that waved in the current, I made a few casts to keep my line in front of me. The hole next to the log was protected by a number of low branches. I ruled out a direct onslaught. Keeping my pole parallel to the water, I made a sidearm cast. Feeding the line out, it unfurled under the branches, the leader dropping the fly just inches from the log. The water swirled and I yanked the rod to set the hook. The fish attempted to run under the log, then swam into the current. A smallmouth, she wasn’t even close to being legal, too small to give a good fight. I let her go and repeated the cast again, this time dropping the fly upstream a few feet above the point I’d hooked the first fish. As the fly drifted over the hole, the water again swirled and I gave a light yank. Three fish later, I called it a night and waded back upstream toward my truck. All three were too small and I let ‘em all go, but the thought of a perfectly wicked cast, enticing ‘em with a fatal dinner then granting a pardon was satisfaction enough.
------

I should say a bit about fishing with my dad on Saturday night. We started late in the afternoon on at the lower end of Thornapple Lake, a spot known for Northern Pike. We didn’t find any Pike, but we continued on down the river to McKenow’s Bridge. At the confluence with Cedar Creek, we got out of the boat and fished with fly rods, each catching four or five bass in about 100 yards of river. In all, we caught a good mess of fish, but all the Smallmouths were too small. But we did get some large rock bass and it was fun watching my father having a good time fishing with a fly rod, something he seldom gets an opportunity to do.
Posted by sage at 10:08 AM