Memories of the 9th Grade: Mark, My Hippie Friend 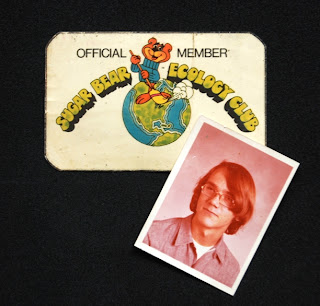 Life is still busy, but I did get away today for some fishing (I'll say more about that later as well as posting a photo of a 19 inch bass I caught on a lightweight rod.) I’m going to pay for my fishing by having to work the rest of the weekend. This is my second memory in a row from the 9th (this one also includes a bit of the 10th) grade. Mark was one of two good friends I lost before my 20th birthday. I've also written about Tom, who died when we were both 19. I looked in a box of stuff I’d kept from school and found both Mark’s picture and my Sugar Bear Ecology Club membership card.
It was Friday night, the day school got out for Christmas. I was a tenth grader at John T. Hoggard High School and that evening at a progressive dinner with our church’s youth group. We went to different homes where we had appetizers, salad, the main dish and then dessert. We were at preacher’s house, eating in the dining room. The TV was on kitchen, tuned to the local news, and we could hear it in the background. Suddenly Mrs. Jennings stepped back into the room. She was quite upset and asked if any of us knew Mark B, a student at Hoggard. Everyone turned to me as she told us he’d been killed that afternoon in a motorcycle accident.

Mark reminded me of John Lennon; his hair was brown, long and stringy. He wore tinted wire glasses and often had on an army fatigue jacket upon which he’d drawn pictures. He looked like a hippie. He was a year older than the rest of us, having lost a year in elementary school. He’d been hit by a car while crossing the street and had been in the hospital for weeks. Although he was old enough to drive, I don’t remember him doing so. Instead, he rode his ten speed everywhere and once received a warning ticket on his bike. Riding down a road with no other cars in sight, Mark wove in and out of the dotted center lane. A police officer, sitting in a parked car in a driveway, saw Mark’s actions and pulled him over and issued the ticket. Mark didn’t make a big deal out of it.

Mark was quiet and mostly a loner. We’d become good friends the year before at Williston’s Ninth Grade Center. Everyday before school, Mark could be found at the top of the north stairwell. He would squat between the two bars of the railing, his feet on the bottom bar and his thighs pressed up against the top. He’d then lean forward and hug his knees, perched over the stairs like a gargoyle. Sometimes he’d read; mostly he’d stare. He was mostly alone. The north stairwell, along with the adjacent boy’s bathroom and breezeway was the domain of those of us who had attended Roland Grice the year before. Although Mark had recently moved to Wilmington from up north (New Jersey, I think) and never really ran around with the pack, his presence in the stairwell gave me amble opportunity to get to know him.

Mark’s philosophy was to bother no one. If someone taunted him, he’d ignore them and walk away. He was the gentlest guy I knew, and I respected him for it. At a time when everyone was running around in gangs and the school was in turmoil, Mark refused to join in. Instead, he began his own little counter-cultural gang, inviting folks to join his Sugar Bear Ecology Club. Those accepting his offer received membership cards that he gotten from cereal boxes. We had to pledge to the “Clean Code.”


-Clean up our world
-Liter hurts everyone
-Each member must do his share
-Animals are our friends
-Nature belongs to all of us
(©1971 by General Foods Corp, of course)

As far as I know, there were only three members of the club: Mark, a guy named Joe, and me.

Later in our ninth grade year, after watching a guy in slings hang by rope while painting the flagpole, Mark got an idea. His lunch was 4th period, the same time I was in Ms. Gooden’s class. He told me to keep an eye on the flag that day when he was at lunch. I did, looking out the window wasn’t anything unusual for me. Our class was on the second floor, over the offices. The flag pole was right in front of us and that day Mark climbed the pole. When he got to the top, he was eye level with us. He held onto the cap on the top like a monkey and swung around the pole, the flag flapping around him. Students flocked to the windows and to the front of the school to witness the spectacle. Mr. Howie and Mr. Barrett, the principal and one of the assistants, were immediately on the scene, demanding that he get down. I thought for sure he’d be suspended, but they let him off with a stern warning. At a time when buildings were being firebombed, climbing a flagpole seemed to be a relatively minor offense.

My dad took me to Mark’s funeral. It was a day or two before Christmas 1972 and held at the Catholic Church on Wrightsville Beach. It was stormy and the tide was in when we crossed the causeway, the waves lapping at the few boats still in the water that late in December. It was my first time in a Catholic Church and much of what happened seemed strange, except for the crying. Everyone cried. Even my father, who’d only met Mark once, seemed visibly moved. His death just didn’t seem fair. Mark had been riding on the back of his brother’s motorcycle. Someone ran a red light at the intersection of Oleander Drive and Independence Boulevard, hitting the bike. His brother was able to hold onto the bike and ride it down. Mark was thrown off the back and across two lanes of traffic. He’d beat death once before, but not this time.

It was after I moved away from Wilmington that they built a new Catholic Church on Eastwood Road, between the city and Wrightsville Beach. They named it St. Mark’s and. When they were building it, my mother told me she’d heard Mark’s family had helped raise the money and asked that it be called St. Mark's. Every time I’ve driven by the church, I’ve thought about stopping and checking it out. One day I will.
Posted by sage at 4:33 PM