The Deaths of Presidents, Friends and Musicians 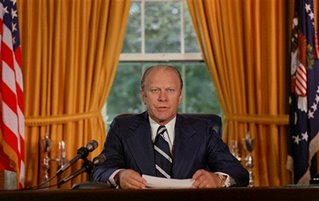 Photo from the Huffington Post, blog by Richard Valeriani on Chevy Chase's role in Ford's 1986 defeat.

I was nineteenth years old in 1976, our nation’s bi-centennial, completing my first year of college. Gerald Ford was in the White House, trying hard to clean up the mess he’d inherited from Nixon. The nation was still smarting from Vietnam, the economy was in shambles, interest rates were going through the roof and there was a presidential election. Saturday Night Live, with Chevy Chase playing the part of Ford, was the one bright spot. I laughed as Chevy, impersonating the president, continually hit his head on airplane doors and terrorized golf-links.

Despite Chevy’s attempts to make Ford, probably our most athletic president, to look like a klutz, I liked Ford. When he came to speak to the North Carolina State Fair, I made sure I was there to see him. It wasn’t that I had anything against Carter (I heard him speak too, and was impressed). But for some reason I can’t understand completely, unless it was a weird attempt at youth revolt, I was a registered Republican. Along with Tom, a friend of mine, we volunteered to help his campaign. We spent afternoons manning phone banks. We sat in on strategy meetings, lead by some big-wig doctor in town, who kept thinking Tom, who was seated on the floor, had a question. Tom had a nervous system problem and would often twitch his neck. I wondered what kind of doctor he was not to pick up on this.

I meet Tom in the Student Union for lunch on Election Day. We talked about the campaign. We talked our first experience at voting, we’d both headed to the polls early in the morning, as if we might miss the opportunity. And we both talked about our feelings that our man was going to lose. Tom then complained about headaches and told me about going to the eye doc and they’d recommended him to see another doctor. I didn’t pay much attention to it. Then we parted for afternoon classes. That night, with interest, I watched the election results. I can’t say I was devastated when Ford lost. There was something nice about having a Southerner in the White House.

I never saw Tom again. I got a call a few days later. Tom was in the hospital. I called a few of our friends and we went up. They wouldn’t let us in. He had a tumor and they’d operated. He never regained conscience. We’d been friends for over three years, ever since we’d started working together at Wilson’s Supermarket. Although I no longer worked there, having moved over to the bakery that summer, Tom and I stayed in touch.

I also stayed interested in politics and as the 1980 election rolled around joined the John Anderson campaign. When Anderson switched from a Republican to an independent, I followed, switching my registration so that I could be his “elector” from the 7th Congressional District (if he’d won North Carolina, which was a real long shot, I’d gotten to go to the Electoral College). Of course, as a third party candidate, he didn’t stand a chance. After the ’80 election, having realized that the Republican Party wasn’t where I belonged, I registered as a Democrat. I’m not sure that’s where I belong either, but I’ve mostly voted Democratic, except for when I can’t stand either choice. Then I vote for some off the wall third party candidate with the hope that my protest vote will make both traditional candidates sleep a little uneasy at night.

Looking back on it all, I have to credit Ford encouraging my interest in politics. I still like the man. I admire his pardons (both Nixon and the Vietnam Draft Dodgers) which helped heal a hurting nation. I have to think that both Ford and Carter brought dignity back to the White House. It’s a shame he can’t be resurrected or reincarnated, for after this president on the heels of the one before him, we could use someone like him. As for Tom, I'll have to recall our adventures at another time. He was a good kid, who never had an opportunity to grow up. 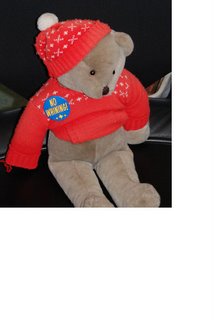 Speaking of death, it’s also time to say good-bye to James Brown. It’s probably politically correct to say that you’re not a big James Brown fan, but I named my first Teddy Bear after him. The bear was given to me by a girlfriend twenty-some years ago. “James Brown Bear” sounded like a good name back in ’85—a bad bear that felt good! That was before it become well known that James Brown like to beat up women. It may have even been before he had one of attempts of out running the police. As far as music goes, we’ve lost a great one. "I feel good," I'm telling myself as I head down to the gym...
Posted by sage at 4:00 PM