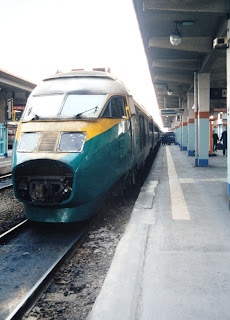 I’m still busy, life just isn't slowing down, and I'm sounding like a broken record. I've wanted to finish this for some time. I started writing about “Chop Head Hill” a few months ago, but decided that it needed to go into the context of a story. These memories were taken from my travels in Korea in January and February 2000.
It’s still dark when I board the morning express in Masan, heading toward Seoul. Early February, it’s chilly and wet but not really cold in this southern port and industrial city. I find my seat, stow my two bags overhead (a backpack and a suit bag) and push my jacket up against the window as a pillow. A pretty Korean woman sits next to me. She looks to be in her mid-20s and is wearing a dress and heels. We smile but when I speak she shakes her head and says “No English.” Soon a whistle is heard and the train jerks and our journey begins. I lay up against the window, alternating my time between looking and reading a book on Korean history and culture. Outside, streets lights are mysteriously shrouded; it appears the world is coming alive within a fog. Dark clouds hid the sunrise; all is gray. As we rush north toward Taegu City, we pass through many rural villages that seem the anti-thesis of Korea’s modern cities. Instead of concrete high-rise apartments, rural homes appear to have changed little over the past century. Small courtyards are protected by a high concrete wall, with a house built into one side of the wall. Coal or wood smoke is seen coming from these humble adobes. All around the villages are fields for rice or vegetables, onions and cabbage and peppers. At Taegu, the woman next to me gets off. 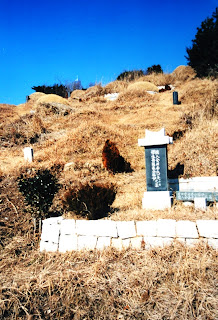 These graves are similar, but not the ones I see from the train. These are from Kojedo Island, south of Pusan and Masan (where they don’t get much snow).

After pulling out of Taegu, the train heads in a northwestwardly direction to Taejon City. This is mountainous country, but the hills are old and worn, like the Appalachians, not rugged and knew like the Rockies. With the trees bare of leaves, I can make out the large nests of magpies. Also dotting the hills in the rural areas are many mounts representing burial sites. Coffins are placed on the ground and stones and dirt are piled up around it. The government has banned the practice because it takes up too much land in a country where land is precious, but I was told that some people still bury their dead in this way, in the middle of the night in order not to attract attention. There is snow on the ground. The roads must be icy, for as we pass one of the crossings, just beyond the gate closing the highway I notice two cars in the ditch and a wrecker working to pull one back onto the highway. Along this section, we pass Yongdong. Near here, during a hasty retreat during the Korean War, scared American soldiers opened fire on civilians, killing many, in a tragedy of the war. Although I am not sure exactly where the site is at, I think about as it’s been in the news recently.

From Taejon, the train heads north toward Seoul, traveling through a highly populated area that’s mostly industrial and suburban. High-rise apartments dot the landscape and there are many factories. The train pulls into the station at Seoul a few minutes early. I retrieve my bags and head up an escalator to the main station, worried how I’ll be able to find my ride with so many people. There, at the top of the escalator, I’m pleasantly surprise to see Chan Ran and Chang waiting for me. They suggest we stop and have lunch at a café across from the college that Chan Ran both attended and now teaches. Afterwards, as we have four hours before I need to be at the airport; Chang asks if I still want to visit Chop Head Hill. When I had arrived in Korea two weeks early, I had asked Chan Ran and her husband about this place. I immediately worried that I had insulted them, but her husband had been there and told me about it. As her husband wasn’t available, Chang came along to take us there. I was glad to have the opportunity to visit the site and the three of us seemed to be an odd pair to tour this site scared to Korean Catholics. Chan Ran is Presbyterian and Chang is Buddhist. We wound through the narrow streets north of the Han River in Chang’s car till we finally got to the infamous bluff overlooking the river. 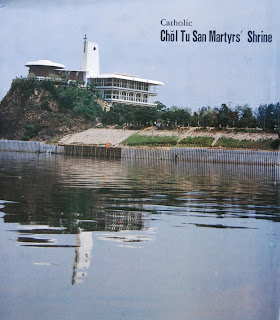 For years, this hill was the site for executions and there is still the round stone, looking somewhat like a millstone, that was used in the beheadings. The condemned had a rope tied around their necks. The rope was pulled through the hole in the middle of the stone, pulling their head inside as an ax severed the head. In 1866, out of protest against French intrusion into Korea and as a way to cleanse the land of foreign influence, the Korean emperor ordered the extermination of Korean Christians. At the time, almost all Korean Christians were Catholics, many having been converted by priest from China. Members of the Catholic Church were lead in chains from across the nation and, upon this hill, they were executed by beheading. After a decade of tension, in the late 1870s, the French and Korea signed a treaty that guaranteed religious freedom for Korean citizens. In the aftermath of this treaty, Protestants missionaries—especially Presbyterians and Methodist—flooded into the country. In all of Asia, only the Philippines have more Christians than Korea. About 40% of the population claim to be Christian, half of which are Presbyterian. Another 40% of the population is Buddhist. On the hundred anniversary of the martyrdoms, the Catholic Church built a shrine in the honor of the martyrs and today the site is known as Chou Du San Martyrs’ Shrine. 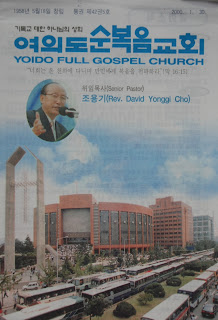 As we still had two hours before we had to be at the airport, we swung by the Yongdo Full Gospel Church. An independent Pentecostal Church with roots in the Assembly of God, they claim to be the largest congregation in the world with 750,000 members. We quickly tour the church. Chang, a Buddhist, seems especially proud of the idea that his country has the world largest church. The sanctuary looks a look like a basketball area and seats, I’m told, nearly 20,000. Although large, I’m left to wonder where everyone worships for even with five worship services on Sunday, they still would only be able to have 20% of their members member’s present.

After visiting the church, we rush to the airport. After checking bags, we have time for a cup of tea before I have to go through security. I shake Chang’s hand and hug Chan Ran, then head down through security. In an hour, I’m flying east and sleeping the night away on a Singapore Air flight to San Francisco.

Other Stories of Korea
Soraksan
Magpie Crags
Posted by sage at 12:37 PM