The Death of Adam: A Book Review 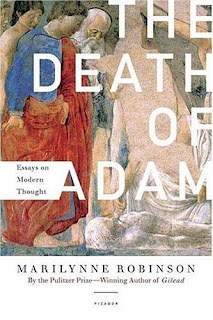 
I love this book. Yet, it’s not an easy book to read. I found myself on numerous occasions reaching for the dictionary (words like lumpenproletariat and priggishness). At other times I wonder where the tangent she appeared to be taking her readers would end. Yet, in these essays, Robinson always came back to her main points. I love this book because Robinson, the author of Gilead, is better at saying things I feel have needed to be said. A self-described liberal, who can be very critical about liberalism as a movement, Robinson is a Christian who is equally critical of the direction of the faith. One of the themes running through the book is that we need to understand our past if we are to have a chance to understand where we are at in the present. Robinson sets out to do this through a series of essays that range from Darwin, to the McGuffey Readers, to the Abolitionist movement, to the Puritans, to John Calvin, to Psalm 8, to wilderness. Robinson is a humanist, not in the silly sense that the word is often used by both “secular humanist” and their distracters within the “Christian right,” but in the sense that Calvin was a humanist. A “Christian humanist,” she see that the human race was not only created by God, but given great potential by the Almighty and we’re to use such potential for the good of all.
Robinson appears to be most critical on the way we in the modern world pigeon-hole philosophies and thoughts without understanding them. She points out various misconceptions of both the Puritans and Calvin by those in the academy, arguing that many must have never read the primary sources of those they were criticizing. Such criticism of being unfamiliar with the thoughts of Calvin and the Puritans extends to the superficial readings of Darwin (by those both sides of the Creationism debate) and even Marx (whom she suggests should have been understood better since it was supposedly the “philosophy of our enemy during the Cold War). She complains that people know and can condemn easily the Puritans and Calvin, without even knowing anything significant about them with the exception of popular misconceptions. Robinson has set out to redeem both, especially Calvin. She makes the point that Calvin’s Geneva was much more tolerant than anywhere in the world during the 16th Century (“the atmosphere of Geneva was said to be somber, but elsewhere auto-de-fe were gaudy public spectacles.”). Sure, Calvin had his faults and supported the execution of Servetus (a theologian who had challenged the doctrine of the Trinity), but that was only one case of abuse. Pointing out the tolerance of Geneva, she notes that the city even allowed the publication of the Koran. Likewise, the Salem witch trials being the exception, Puritan New England was more tolerant than the mother country, especially in the administration of justice. However, I should note that she does not point to statistics to support her argument but to anecdotal evidence, citing a joke “joke” made by Jonathan Swift after the satirist had watched a woman flayed in England (“it altered her appearance for the worst”). She notes there were no such jokes coming out of the literature of New England.
Robinson is troubled that although many have spurred the teachings of Darwin, we have brought into a Darwinism system of economics that appears to be disconnected the with faith system of most in America. In an essay on the family, which is really about economics, she complains of having heard people say they “can’t live by Jesus’ teachings in this complex modern world,” yet still maintain that they’re Christian. “They might as well call themselves the Manichaean Right or the Zoroastrian Right and not live by those teachings,” she suggests. She makes the case that we’re to take care of one another and the poor and that the Sabbath wasn’t a bad idea.
Robinson is also concerned over the tyranny of ideas. We’re prigs, in that we seem to thing that our ideas (the most modern or most up-to-date ideas) are superior and can be cited to trump older ideas without even considering the their merits. Political correctness isn’t always right. Almost as a way to slap the face of being politically correct, she often uses older language styles such as saying “man instead of human.”
Although sympathetic for causes such as saving the wilderness, in the end Robinson makes the case that the hope not only for human survival but also for the survival of the planet is not saving the wilderness, but in redeeming civilization. This is not an easy book to read and requires a critical eye to see both her arguments and places where she may have overlooked. Yet, I love this book and strongly recommend it for others interested in modern thought, politics, theology and philosophy.
For other book reviews by Sage, click here.
For Semicolon's Saturday's list of book reviews in blogs, click here.
For thoughts of the book from Dave, an economic professor, click here.
Posted by sage at 9:36 AM