Catching Up and a Poem 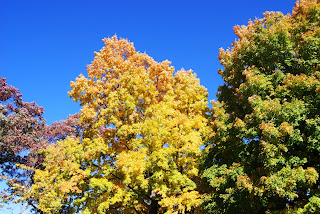 The trees are now putting on their fall display, just a brief flurry of color before the steely skies of winter… Life continues to be very busy and will remain that way for a few more weeks. I’m not getting around to reading blogs like I had been, but I’ll catch up or email me if there’s something you post something you want to make sure that I see. The good news is that the development (a term that is vague!) I’m working on is now over 75% funded. Hopefully, when things slow down, not only will there be a break, there will also be a celebration!

Yesterday, the war came home as a son of friends was shot in Afghanistan. He was hit in an artery to his arm and was in bad shape and they had to take a piece of a vein out of his leg to repair the artery. But they got him patched up and he’s now in Germany. Say a prayer for Carl as well as for everyone out in Southern California.

I’ll be heading south right after Thanksgiving… I edited this poem that I’d written a while ago—about the experience of being on the beach for a moonrise.


October 1985
A glow, at the horizon, betrays the hidden moon
just a day after the full harvest.
Soon, a sliver appears in the distance
and slowly ascends, a ghost rising at night.
With brilliance that drowns the stars
its rays shimming across the crest of waves
directly at me.

Buttoning my jacket, for the air has now turn cold,
I walk amongst the shifting dunes,
digging my toes deep into the cold sand.
The rustle of sea oats and the crashing surf
summons me from self-imposed silence.
Procuring the moment, I’m drawn across time
to those enchanted days of summer
when we were as one.

Now, on different coasts,
We’re separated by more than miles.
Posted by sage at 10:09 AM