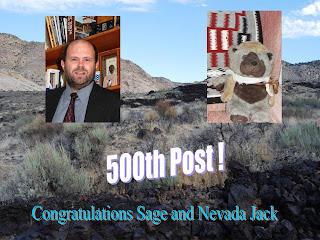 WOW! I had no idea when I began blogging back in December 2004 I’d get to this point. I would like to look back over the past couple of years and see how much water has flown under the bridge. For the most part, blogging has been enjoyable. For me, it’s always nice to know that someone paying attention to my scribbling. I feel blessed to have so many of you reading my blog and cherish your comments as well as I enjoy learning about your life. When I first started blogging, it was an experiment to see what this was all about. I didn’t know anyone blogging, but in doing google searches had come upon some blogs that I found interesting. I entered into the blogging world slowly, only writing occasionally and being read just as infrequently.

It wasn’t until mid-2005 that I began to pick up regular readers, some of whom are still around. One of the first was Angie, (aka Jadeprimadonna, see sidebar for the blogs I refer to here), a graduate student at Clemson who was at the time writing about her Appalachian heritage. From her blog, I started reading Hillbilly Rave (now known as the Appalachianist, a blog that has included his stint in Iraq). I still read both of their blogs and they occasionally post comments here. It was through the Appalachianist's blog that Murf came across me and my life hasn’t been the same since. Somewhere about this same time I came across Michele and her weekend game that encourages you to meet new bloggers has always been enjoyable and helped me to pick up a few readers along the way (such as Kenju, Kontan, Keda, Karen. Carmi and Michael).

By the fall of 2005, I was blogging full-steam. It was then I started reading Suzy-Q (not her real name, but close) from Florida. She was interested in my outdoor posts and a trip I took to Honduras and she had an interesting blog even though she seemed to be a bit more conservative than me (or maybe I should say, she supported this president who, with his fiscal policies, is anything but conservative). Our honeymoon was short lived for she wrote a post, parroting the right-wing talk show host, about how Christmas is under attack from the secular world. Of course, I partly agreed with her, but instead saw the attack not coming from liberals but from business interest that had made the holiday into a sham. I'm not too worried about nativity scenes on public property… We’ll, my response didn’t sit too well with her and soon I found myself at war. About this time, her blog took an extreme right turn. We fought over Christmas and into the winter of 2006, until I and a host of others got banned from her blog. I should have known not to trust her when she took seriously my parody of the CIA sending a gay barber to give bin Ladin a close shave. The best part about this war was that I got to know Ed Abbey with whom I shared many outdoor interests. One of the interesting things about blogging is how one friend leads to another (through Pat I met Gautami, through V I was introduced to Diane, from Pia I got to know Bone, etc).

At first, I did more satire, making fun of Michael Jackson, the President, tidbits in the news like a Chicago streetlight casting the face of Jesus, picking on a blogger applying for grad school at Pat Robertson’s University, and even providing reference letters for Murf. I wrote about travels to Honduras and to post-Katrina New Orleans, about fishing at dusk and watching the stars… I wrote a poems such as an ode for an old hangout at Wrightsville Beach that was torn down when I was a youth, another that honored a farmer friend who passed away, and another for my secret love, Sylvia Plath. I shared with you the tragic suicide of a friend and innocent tidbits from my life. I reviewed movies and books. But my favorite genre has been memoirs—writing about my years working in the bakery (including Linda) to scoutmasters I’ve known, to places I’ve visited, and we can’t forget the Appalachian Trail. One of these days I need to collect all these in a book to give to my daughter so that she’ll know what my life was like before her birth.

I should introduce my side-kick, Nevada Jack, the author of many of the satires and parodies that I’ve written over the years. Some friends gave me this “frontier bear” when I first moved west. At first, I thought I’d name him Yukon Jack (for that Canadian knock-off of Southern Comfort, both sickly sweet liquors). But when I decided to elicit his help with my work with kids, I didn’t think it appropriate to have him named for a type of liquor, hence the change to Nevada Jack. He’s been a faithful companion for twenty years.

From the beginning, I noted I wasn’t going to talk about my family or work and have mostly maintained that standard… A handful of readers know me from outside the blog. Very few of these ever comment in the blog (there’s one exception). Most will email me when something strikes a nerve. A few others of my regular readers have gotten to know better via email, in which I’ve shared such secret information… As for family, I’ve have broken my pledge on a few occasions, especially when it came to my mother (we’ve been dealing with her diagnoses of Alzheimer’s since the summer of 2005) and my daughter who is the greatest kid anyone could ask for. My favorite adventures are with her.

We’ll have to see if I have enough material to write another 500 posts. I probably will, for writing memoirs is a lot like the widow in the Bible (1 Kings 17. A famine was on going and she had only enough flour to make one last loaf of bread. Elijah got her to make him a loaf and she did and found that the amount of flour kept expanding and she had enough for her and her son and the prophet until the famine had passed. I keep a list of story ideas to write, and it seems that every time I knock off a few of them, I’m adding just as many new story possibilities to the list. There are also variations of a tale that I might tell. And then, there are always things going on in politics and in my life which I can make fun of…

Thanks for reading my blog, I feel honored to have so many wonderful readers and blessed to have gotten to know people from all around the world via the blog.
Posted by sage at 2:14 PM