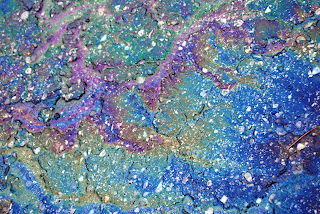 I haven’t wrote much lately about baseball and politics. Sometime soon, I need to wake up Nevada Jack from his long hibernation and get him back writing satires, but until then I’ll post a few things on my mind. The psychedelic photograph was taken a few weeks ago when I was out photographing reflections. Someone’s car had leaked a bit of gas that spread across the water giving the colorful swirls. Of course, it’s not environmentally friendly as the gas was being washed into the storm sewer, but it made for an interesting set of photographs.

Sunday afternoon I got to catch the last half of the Pittsburgh Pirates/Atlanta Braves ballgame. Although I would love to see the Pirates back over .500, a nice consolation was to watch them whip up on the Braves 13 to 2. Closer to home, it’s good to see the Detroit Tigers back in control of their division. Once again their Skipper Jim Leyland (the Pirate coach when I lived in Pittsburgh) is showing that he knows baseball.

Who’s working for Fido’s Vote: Have I missed it? I haven’t heard any of these talking heads running for President say anything about the contaminated gluten from China that has corrupted our pet foods and made many pets sick and causing the death of a few. Certainly, one of them has to be a pet lover? All politicians need a dog named Checkers that they can work into a speech when they are in need of sympathy from the votes!

The contaminated gluten incident shows just how vulnerable we in America are to have dangerous products brought into our country without being check. When I read that only a small percentage of shipping containers are checked by security, I wonder what is going on. It seems to me that they all should be checked for bombs or contraband. Furthermore, food products including that which goes into animal feed should be tested. The cost should be bore by the seller or shipper. Certainly this will mean that retail prices will rise a bit, as the price gets passed along, but it’s a small price to pay for security. I know some will see this “security tax” as a tariff. But I think they are wrong, it’s just good economics to make sure that all cost are accounted for. Otherwise, we subsidize the product, borrowing from our future. If there is a massive poisoning or an attack, the cost will be great and the destruction will not just include the physical damage but also damage to the world economy. By paying to have a bit more prevention in the short-run, all of us, the consumer and the supplier, will be more secure in the long run.
Posted by sage at 9:30 AM