Learning theology from a dog 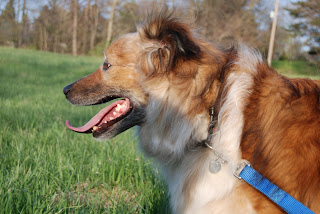 Earlier this week I wrote my interest in theology and how it got a jump start due to my interest in a certain girl who played the piano at a United Pentecostal Church. Continuing along that line, and because I’m mad as hell at my dog, I thought I’d take a break and write about what I’ve learned about theology from that mutt as he stews while being leashed to his dog run.

I took the morning off and was doing some work in the garage and out in the back year. This included putting up my hammocks for the summer season. Right now, since the leaves haven’t completely unfurled, I could get a tan while sleeping on the hammocks, but that’ll change in a week or so when the leaves are out and the hammocks are shady. I digress. I’ll talk about hammocks later, now I want to talk about this dog whose neck I want to wring.

Trisket is pretty good about staying with you. When someone is out working or playing in the yard, the dog is free to roam. With his herding instincts, he never gets very far away. This is okay, except that the yard backs up to some woods and the corner of a pasture and somewhere out there the dog has found something dead and stinky to roll in. And this isn’t the first time. He did it last week. He’s done it his whole life. Once in Utah, when he was probably only six months old, we were hiking in a canyon in the winter and found something dead to roll in and the dog and came back to me wagging his tail and stinking to high heaven. I grabbed him by the collar and dragged him into the nearly frozen creek, getting us both wet, as I tried to get him as clean as possible before the trip home (I didn’t have the truck then, and I wasn’t going to let him inside the car smelling like a dead rat). Trisket rolls himself in dead stinky stuff at least twice a summer. Its not even summer and he’s already reached his quota for this year. For some reason, far beyond my ability to understand, the dog gets great pleasure out of this disgusting habit. And he knows it drives me crazy. A few minutes ago, he came running out of the strip of woods with a smile on his face, only to stop as soon as I looked up. His tail had been wagging, but it quickly dropped between his legs. He knew he’d been caught doing something that brought him great happiness (in some perverse sense) while angering me. Now he’ll have to get a bath, which he loves.

There is an old Appalachian folksong titled “Don’t You Hear Jerusalem Moan.” One of the verses goes:

That’s my dog. He loves sinning and bathing and I suppose there are a lot of us like that. We know we shouldn’t do it, but it’s just so much fun, and afterwards we feel guilty until we realize that God still loves and forgives us. I’m also sure there are been times God has wanted to wring my neck just like I want to wring my dog’s neck.

Okay, enough ranting. God has been graceful and I should do the same. I’ve now cooled off enough that I can go out and perform a canine baptism without being tempted to drown the mutt.
Posted by sage at 11:23 AM