Hiking the Appalachian Trail: A Memory 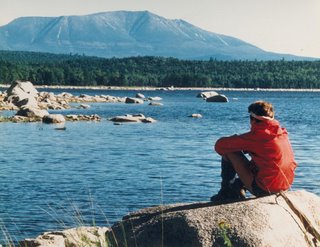 It’s a treat to wander through the north woods of Maine. The Appalachian Trail cuts through these forests, wanders around as many lakes as possible, and goes over as many of the mountains summits as possible. It’s the most isolated country in the Eastern United States with one stretch of over a hundred miles where you have don’t cross a paved highway. This is no place to get sick. But one afternoon, a bug hit me. Maybe I forgot to treat some water, I’m not sure, but for a couple of days I was glad there were plenty of bushes to hide behind.

At the time, I was hiking with several friends I’d made along the trail. There was Slim Jim from Florida, he’d just turned 21. “Off-shore Steve,” was a commercial fisherman who’d hiked the entire length of the trail the year before and had come back to hike Maine with his sidekick, an old guy named with a snoring problem named Chainsaw. If you were camping near Chainsaw, you didn’t have to worry about bears at night; he scared them away. And then there were the two Brits, good old boys from Merry Ole England. Dave was a serious hiker. His side kick, Paul, would often find a way to hitchhike ahead and be waiting in camp for us with a few cans of beer. As we got further into Maine, it was becoming harder for him to hitchhike, for even when there were roads, there were few cars.

On the afternoon in question, several of us had eaten lunch together. When everyone else headed out, I decided to hang back and spend some time in my favorite recliner (leaning up against my pack) reading Frederick Buechner's Treasure Hunt. After an hour or so, I headed off, knowing I’d catch them at camp which was planned for a shelter and spring on the north side of Sugarloaf Mountain.

The bug struck as I reached the first switchback up Sugarloaf Mountain. I quickly dropped my pack and trotted off the trail and behind some bushes. Afterwards, I felt faint and chilled. I found a large flat rock, place my pack on it, pulled a sweater on and lay down with the pack as a pillow and slept. An hour or so later, I woke up. Slowly standing, I felt both tired and unsteady, but knew I needed to make it to camp, a mile or so on the other side of the summit. The mountain appeared daunting, but I had no choice but to go forward. I prayed for God to give me the strength, to let me get to my friends where I could die with dignity.

I carried a small portable radio in my pack. It ran off a single double-A battery and had a lightweight ear piece. I had mainly used the radio to check weather, but this afternoon, felt it might take my mind off my troubles. As I hiked, I searched for a station and finally came upon one in Bangor Maine that was playing classic rock. “The police in New York City shot a boy right through the heart, in a case of mistaken identity…” I started humming to “Heartbreaker” by the Rolling Stones. They went on to play a set that ended with “Satisfaction.” Listening and humming, I picked up my pace and in no time was across the mountain and heading downhill toward camp.

That evening after a dinner of Mac and Cheese, I took out my journal and wrote that Mick Jagger and the Stone’s had helped me get over the mountain. I went to bed early. In the wee hours of the next morning, with my stomach still churning, I woke up to a horrible realization. I remembered my prayer of the precious afternoon, where I asked God to help me get over the mountain. I’d given the credit due God to a rock band. Then I headed out into the dark of the night, to find a bush.

Looking back on it, twenty year later, I realize that God does work in mysterious ways, even through a rock singer with ugly lips.
Posted by sage at 11:25 PM