They Marched Into Sunlight: A Book Review 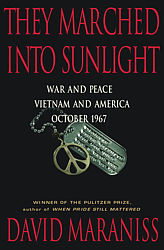 I was in Mr. Brigg's 5th grade class in the fall of 1967. At the same time, David Maraniss was a freshman at the University of Wisconsin, site of one of the first violent anti-war protests. I don't recall any of the anti-war protest in '67 and Maraniss recalls little of the protests, mostly just a whiff of tear gas he got while watching the chaos from a distance. After exhaustive research, he now knows more about it and after reading his book, I understand a bit about what was happening.

There had been numerous protests against the Vietnam War prior to October ‘67, but the Wisconsin protest marked a change in tactics on both sides. Unbeknownst to the protesting students, the day before and half a world away, the “Black Lions,” a highly decorated American battalion, was ambushed in the Long Nguyen Secret Zone northwest of Saigon. Using the Wisconsin protest and the battle as a backdrop, and based upon countless interviews, Maraniss weaves together a compelling story. This is a timely book, as we again find ourselves as a nation in a war that is raises a lot of questions.

The world was more innocent in ’67. Although thousands of soldiers had died in Vietnam, the battle of October 17, 1967 was especially troublesome. It was unheard of such a large force to be ambushed. There were many mistakes made on the American side in the battle. Some of the bad decisions were made by commanders on the ground, who even though they made mistakes, by all reports remained calm in the face of overwhelming odds. Other decisions were made by higher ups far removed from battle. One such decision at the beginning of the battle was to halt artillery fire to allow air strikes to move in. But the air support wasn’t forthcoming and the soldiers were left to their own resources for over thirty minutes. During this time they couldn’t even use mortars. Prior battles plans called for American soldiers to engage the enemy, and then withdraw allowing air strikes and artillery to be brought in on enemy positions. This time, with the battalion commander under pressure to engage the enemy, the Americans didn’t pull back and found themselves fighting for the lives against a hidden and much larger enemy force.

By the time the battle was over, there was plenty of blame to be passed around. In addition to poor decisions, equipment failure was also a problem. The equipment officer in going over the heavy machine guns found that of the eight abandoned on the battlefield, only two were functioning properly. Many M-16s jammed as well as the grenade launchers. Pinned down by a well hidden enemy, the failure of equipment only added to the chaos.

The dead from the October 17th battle included the battalion commander, Lt. Colonel Terry Allen, son of a World War II General and Major Donald Holleder, who had been a football standout at West Point. The Army couldn’t deny the battle occurred, so they tried their best to spin the events. With so many of the ground commanders and officers dead, this was easier than it might have been. They greatly inflated the number of enemy killed. They refused to call the battle an ambush and called it a victory even though survivors said otherwise. One of the most amazing “spins” of the battle was awarding Major General Hay, commander of the 1st Division, the Silver Star for his heroic actions that day. Maraniss found no evidence that he was even on site during the battle, yet the citation tells about how he brought his command helicopter in low to direct artillery fire on enemy positions. If it hadn’t been so deadly, some of the antics of the military would have been quite humorous. “What a funny war,” one soldier kept saying in his letter’s home.

If Vietnam was changing in ’67, so were things on American campuses. As protests replaced panty raids, police and university administrators found themselves in a new situation. In Wisconsin, what many assumed would be a peaceful protest, with many of the students having learned non-violent tactics in the civil rights movement, turned into a full scale riot. What started as a protest against Dow Chemical (makers of napalm) on October 18, ended up in a full scale riot. Neither students nor police were equipped to handle the situation. Only four officers in Madison had riot training. Many students, who had been ambivalent toward the war, became incensed at the police handling of the situation and became overnight radicals. A split began to occur between extremists who wanted to tear down the system and those who were just against the war. The radicals began to despise the liberals almost as much as they despised the conservatives. Maraniss provides detail into the lives of students and facility involved as well as background into the planning by both the students and the police.

The weekend after the protests in Madison, many of Wisconsin’s students boarded buses to Washington DC for a march against the war. In the city, a depressed President Johnson was trying to figure it all out. Maraniss provides a behind the scene looks at the collapsing Johnson administration.

This books gives insight into lives and training of the officers and soldiers in Vietnam, takes you into the boardroom of Dow Chemical, into the halls of academia and into the White House. Maraniss does an outstanding job weaving together all these threads as he recalls the events in the fall of ’67. Although I recommend this book, it’s only a start in understanding the complexity of the Vietnam War.