This morning, sometime before 6 AM, I spent a day with B. It was a weird, but I was glad to have the opportunity. I drove down to Pittsburgh and arrived late in the morning. He was getting ready to go into a meeting and invited me to come along since I’d know a few of the people from when we worked together nearly 20 years ago. B introduced me to those who didn’t know me and then ran a smooth meeting. When it was over, an hour or so later, he passed around a wooden box with fine chocolates. B always liked the finer things in life. He invited me to follow him, as he had to run some errands. I followed in my truck and was surprised to see B driving a snooped up late 60s Chevy Chevelle that was undergoing renovation. When finished, it looked like it'll be a nice car. B’s vehicles had always been more utilitarian and conservative. Since I’ve known him, he’d mostly driven a series of Subaru station wagons. But then I remembered the time we meet at a conference in Denver. I’d rented the car and they assigned me a PT Cruiser. I wasn’t sure about it, but Brent thought it was great and we drove around town like a couple of gangsters. “Did he always like hot cars?” I wondered.

In the dream, one of the places we stopped while running around the burghs on Pittsburgh’s Northside was a tire store. As he was having new tires installed, I asked about the car. “I always wanted one like this when I was growing up,” he said. I thought it was odd that he was getting new tires since he wasn’t going to be around much longer, but was impressed that he was living as if life was going to go on forever. It was like I knew what would happen, but couldn’t bring myself to ask him about it. Instead, we talked about skiing and fly fishing. We left the tire place and went to meet Mary, a mutual friend, for dinner. I kept thinking I couldn't stay long for I needed to get on the road home, and I woke up before we got to Mary's house.

The day had a surreal but comfortable feel about it. B treated people with kindness and respect, a trademark of his. And they responded to his warmth with an obvious love for him. Throughout it all, I wondered why no one was talking about the obvious, that B didn’t have much time left. In the dream I couldn’t bring myself to ask questions about his death and was wondering if I was the only one who knew.

B took his life in early November; it was nice to be able to spend another day with him and I wasn't ready to wake up this morning. 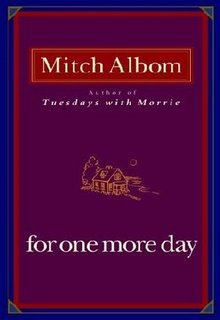 I’m pretty sure I know where this dream came from. I was so busy the last two months of the year that I pushed B’s death out of my mind. But every once in a while, something happens that brings it back into the forefront. A conversation I had yesterday triggered his memory. Furthermore, late last week I’d read Mitch Albom’s book, For One More Day. This was a book that I’d been given for Christmas and it’s time that I read Michigan’s own “chic-lit” author. It didn’t take me too long to read the book. I read most of it Friday night, while sitting in my truck in the freezing cold waiting for our exchange student to come back from an out of town volleyball game. The bus was an hour late and I got 3/4’s of the way through the book.

For One More Day is the story of Chick (a name that I thought ironic, since this is classic chic-lit). Chick’s parents divorced when he was young. It’s the story of how he kept trying to win his father’s approval (which was always linked to baseball) and how he never appreciated his mother who took on extra jobs so that he and his sister could go to college. Chick led a self-absorbed life. Probably his only redeeming feature is that he played part of a season for the Pittsburgh Pirates. But he was always so focused on earning his father’s love that he couldn’t be there for his mother or for his family. After losing everything, he tries to commit suicide, but even screws that up. He then dreams (or is it a dream?) about his mother and from this encounter, finds the will to go on with life, The book’s okay, but then again Albom isn’t just a chic-lit author, he’s also a sports writer for the Detroit Free Press. When you write about sports in Detroit, it pays to have a sideline like writing sappy books about the relationships between mothers and sons.
Posted by sage at 1:20 PM