Back in June, I spent nine days in New York City and have already done a five post on my time in the city (the gardens by the Cloisters, NYC hideouts, lunch on StatenIsland, Yankee game, and walking in New York).  Here, I will try to summarize the rest of the trip… 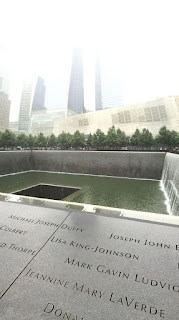 The World Trade Center Site:  It was drizzling when we visited the site of the twin towers.  Today, in the shadow of the new tower, there are two holes in the ground with water cascading down on each side and along the top are the names of the thousands who died in the 2001 attacks.  The drizzle and mist in the air made the visit even more solemn and moving (and probably less busy so we were able to see more).


Wall Street:  I’d been to Wall Street before but felt it was important that my daughter experience it and get to pet the bull and to walk among the money exchangers.  I didn’t remember, however, that the site of George Washington’s inauguration was right across from the stock exchange.  Ironic?  Probably not.  Money and politics have gone together since antiquity if not before.   Much of the area around the Battery, just down from Wall Street, is still under construction due to damages which occurred in Hurricane Sandy.

Eating:  There’s lots of great places to eat in New York, but I wasn’t there to eat.  I wanted to see and do and besides at the end of the day my daughter (who was doing an internship at the UN) was normally exhausted and just wanted to quickly get something to eat and crash.  Many times for lunch, we ate street food or at many of the Pizza Places. Several people said I must eat at Lombardi’s Pizza (not named from the Green Bay Coach, but the oldest pizza place in America).  We did, it was good, but so were many of the other pizza places that also cooked their pizza pie in coal-fired ovens (and the others without names were much cheaper).  We ate several times in Grand Central Station, where there is a variety and we could all go to our preferred vendors.   We ate at a Brazilian place, a Thai place and a Chinese place (the latter was Chef Yu, on 42nd street, which was excellent).  Although the hotel where we stayed didn’t have a restaurant, we “ordered” food which was delivered and generally pretty good.

Coney Island:  One day we took the subway out to Coney Island for lunch…  And what else do you eat at Coney Island, but Nathan hot dogs (which were as expensive there as they were at Yankee Stadium).  After lunch, we walked around the beach.  There is a neat minor league ball park right by the beach (Brooklyn Cyclones), but the team was out of town.  I’d been told that you need to experience a game there at night since the rides are all next door and provide a colorful view when there is no action on the field.  After walking around the beach for a while, we walk by the stadium and on the wall was plaques for each firefighter from Brooklyn killed during the 911 attacks.  There was also a panel for police officers and other public servants from Brooklyn killed in the attack.  It was sobering to see how those who died came from all over New York.  In front of the stadium was a statue of Jackie Robinson and PeeWee Reese.  Robinson was the first African-American to play in the major leagues and was befriended by Reese and it all happened when the Dodgers were in Brookyn. 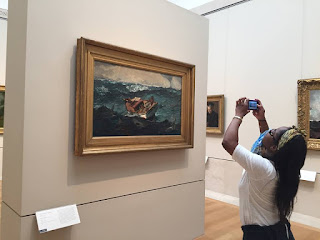 Museums:  They’re great.  I spent all day (from the time if opened to when it closed) at the Metropolitan Museum of Art and could have spent another day there.  From all the over-sized paintings of Washington (including him crossing the Deleware), to Winslow Homer’s troubled ocean scenes, to the large collection of Hudson River School paintings, to the Monets and Van Goghs…  I feasted my eyes upon the paintings (there’s more there, but when you only have a day…).   We were lucky to catch a special exhibit of Van Goghs last paintings (Irises and Roses), to witness some of the detail work (you had to use magnifying glasses) from 16-18 Century India in the Sultan of Decca, India, 1500-1700 exhibit.  But my favorite special exhibit was “Navigating the West: George Caleb Bingham and the River.”  This exhibit featured work set along the Mississippi River and since I’d just finished reading Old Man River before traveling to New York, I was ready to see this exhibit.  We also visited the Cloisters, which is another museum that is linked to the Met.

Concerts:    In the summer the New York Philharmonic does a series of free concerts in the park.  On the first Friday we were in the city, we took the subway to Brooklyn, picked up dinner at a small bakery that had “meat pies” and had a picnic while watching the concert in Prospect Park.  There was a huge crowd and the flight path for JFK was right overhead, so the music was kind of hit-and-miss.  We did catch up on all kinds of Brooklyn gossip. 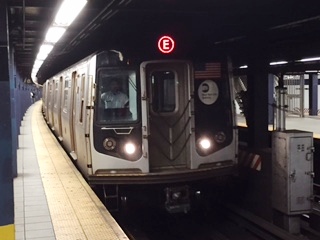 The Trains:   I know my earlier post made it sound like we walked a lot (an average of over 10 miles a day) but we didn’t limit ourselves to hoofing it. I am not a big city-type person, but I love riding the trains and subways.  The sound of the cars, the way the sway and the way wheels squeal when they go into a curve…  At times, they were extremely crowded, but off peak, it was generally a pleasant experience.  Not quite like long-distant trains, but still a pleasure.  There were three stations near our hotel (one was 2 blocks away) so it was always easy to get to where we wanted to go.  The seven day Metro Pass for $31 is a great deal.  Unlimited rides on subways and buses.  If you take more than 11 trips, you’ve paid for your pass and by the second day, we’d taken more than 11 trips on the subway.  And, where else can you find roving singers, coming into the car, performing, passing the hat and then moving on to the next car?  However, I must warn you, if you are used to subways in other major non-US cities (London, Moscow, Singapore, Bangkok, Beijing, Tokyo...) the subways will seem quite dirty and they are... 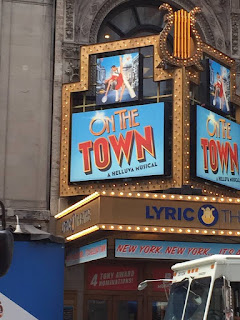 Broadway:  Well, it was actually on 42nd Street.  We didn’t see the shows we wanted because of availability and wanting to see different shows.  My daughter’s schedule also made it more difficult, but we did get to see one show (not on Broadway but on 42nd Street) and it was good.  The show was a remake of “On the Town,” which was about a group of sailors with a 24 hour leave (during World War 2) as they try to make the most of the day.  One of the guys is trying to find “Miss Turnstile,” a girl whose photo is all over the city for the month, while another just wants to find a girl or girls and the third is trying to see the sights his father told him about… The music was done by Leonard Bernstein.  There’s lots of singing and dancing and fast action as the three get to see all of NYC in their 24 hour leave (or 2 hour show).  It was busy on the street going into the theater but coming out at night it was another world, packed with people and with lights everywhere!