I taught a six week class this summer on Mark Twain’s Western Years using Roughing It as my primary guide.  In addition to rereading Roughing It, I read this interesting study about the Clemens brothers. 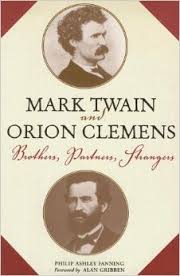 In much of Mark Twain's writings, his older brother Orion comes across as a bumbling idiot. Was he?  AOrion had led and supported the Clemens family from an early age when their father died.  He also held a responsible position in the Nevada Territory, the territorial secretary, a political appointment he earned for his support of the Republican Party in the 1860 election.  Like his younger brother, who became Mark Twain, Orion desired wealth, but he was known to be a man of principle and stuck to his principles even when they led to financial shortcomings and failures.   Philip Ashely Fanning examines the relationship between these two brothers, who were similar in some ways, yet very different.
Orion was ten years older than Samuel Clemens, so when their father died, he became the patriarch of the family.  He worked in various positions along the towns of the Mississippi, as a newspaper man, a printer and occasionally as an attorney.  At a young age when Sam quit school, he went to work for his brother.  This arrangement didn't work well.  One of the stories told is that Orion decided there were too many stray cats hanging around the print shop and had Sam collect them in a sack and drown them, something that bothered the younger brother who always had a soft spot for cats.  In 1852, Sam quits and heads out on a trip though New York, Philadelphia and Washington DC, funded by working in various print shops and newspapers along the way.  He occasionally wrote articles that appeared in his brother’s newspaper. During this time, Orion broke with the family and became convinced that slavery was evil.  This lead to him becoming a Republican and working for the party in the 1860 election of Abraham Lincoln.

Coming back from his trip east, Samuel Clemens continues to work in print shops and for newspapers, until he concocts a plan to go to South America.  On his way down the Mississippi, to New Orleans, he changes direction and accepts an offer to "learn the river."  In 1858, Sam became a riverboat pilot, an occupation that paid more than the Vice President of the United States.  At this stage, the younger Clemens usurps his other brother’s position as the family patriarch.  After the Republican victory in 1860 and the beginning of the Civil War, their role reverses with Orion being offered a political position in Nevada as Sam finds him out of work.  The two of them head west, with Sam bankrolling the trip from his savings.  Later, when Sam (now known as Mark Twain) begins to write an account of his western adventures, he depends heavily on his brother's journals to reconstruct (in a humorous manner) the stage trip across the country.  This account was published in his second book, Roughing It.  In Nevada, the brothers parted ways for a period.  Twain's practical jokes and attempts at humor created problems for his brother and sister-in-law.  Sam headed to California and then to the Sandwich Islands (Hawaii) while Orion headed back to the Midwest.

Over the next couple of decades, Orion found himself having to depend on his younger brother's generosity both for money and positions.  Orion, who was always honest, finds himself excommunicated from his church after having expressed his beliefs.  At Sam's encouragement, he beings to write an autobiography.  Sam begins to insist on rewrites as a way to protect his own self-constructed myth.  Orion seems to have compiled, even though much of the autobiography has been lost (and may have been burned by Twain or lost by his biographer).

Fanning presents some interesting ideas concerning how Twain related to his older brother.  He offers some interesting possibilities concerning the brothers father's death, suggests that after Twain had thoughts about killing his brother, and that Orion's time in Nevada was much more successful than Twain would later acknowledge (he was often the acting governor and as such helped settle a border dispute with California).  He also demonstrates how the younger brother encouraged his older brother to go into the ministry, even though later in life Orion would find himself excommunicated because of his unorthodox beliefs

Although Fanning’s book raises a lot of questions concerning the two brother's relationship, he also helps redeem Orion for the "bumbling idiot" characterization in which he's often been portrayed.  Unfortunately, due to loss of material (especially that which was written by Orion) and the inability to know what's happening inside the mind of another, we will never be able to really know for sure if some of Fanning's ideas are correct, but it is safe to assume that Orion needs to be assessed in a different light.  This, Fanning does, while also showing how Twain, a wonderful author, had a mean streak and was not above throwing his brother under the bus in order to make himself look better.
Posted by sage at 7:14 AM