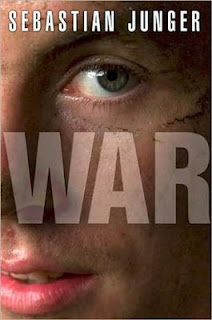 In my travels earlier this month, I had plenty of time to be by myself driving and I spent much of that time listening to this book.  Sebastian Junger, author of A Perfect Storm, spent 15 months shadowing a paratrooper platoon in Afghanistan’s Korengal Valley.  This was one of the most dangerous spots in the war as it was a conduit from Pakistan for foreign fighters coming into Afghanistan.   The unit took significant casualties and was frequently under fire.  I was especially interested in this book (as I was with the documentary Restrepo) for the book and movie featured a man I knew and whose parents are good friends of mine.   Vanderberge was wounded, shot in the arm in an ambush.  In the movie, one doesn’t get a sense of what is happening as the film is chaotic like the battle.  But in the book, Junger provides more insight into the objectives of the American commander and the Taliban fighters.  However, this is not a book about tactics or strategy, but a personal look at the way soldiers go about their work in the face of danger.  There is much in the book about courage and honor, the excitement of battle and the boredom of waiting.  However, even with so much in the book about honor and courage, Junger admits that "modern war is not about honor, it is about winning.”

In addition to telling the stories of the soldiers involved, Junger draws upon a host of scientific studies that explore what happens in the brain in combat.  Quick decisions are crucial to survival and once one has been shot at, the brain immediately learns to react.  Also critical to survival is the importance of the unit.  Even when behavior goes counter to one’s personal safety, fulfilling the needs of the unit is critical for it means there is a better chance that the unit will have will have an overall lower causality rate and therefore the survivability of the individual within the unit increases.  In a counter-intuitive way, personal safety becomes secondary to the needs of the unit.   If everyone just looked out for themselves, the whole unit could be wiped out.  Yet, the men must feel they have some control in the outcome which is why highly trained men are less likely to break down when in combat.  The adrenaline of combat is also addictive as Junger explored how men longed for it.  It’s a world where everything is important and nothing is taken for granted.

Yet, as exciting as combat can be, Junger also reminds his readers that much of war is carrying heavy loads uphill (as one tries to get the height advantage on one’s enemy).  Much of war is also about waiting.  I would have thought that being in life and death situations would force more discussion about God, and there was some, but one soldier summed it up this way, "Who needs God when you can call in Apaches."  Apaches are helicopter gunships.

Junger also explored the economics of modern war in a micro-level.  A shoulder launched Javelin that could be sent through the window of a car a half mile away cost $80,000 each.  This weapon is fired by a man who doesn't make that much in a year at a enemy who couldn't hope to make that much in a lifetime.  The foreign fighters were a boom for the villages of the Korengal as they got to charge those fighting for the Taliban outrageous rates for importing ammo from Pakistan (and would therefore encourage the fighters to use up their ammunition).  The foreign fighters would also give a few bucks to local teenagers to shoot a clip into the American positions.  The youth would climb a mountain and from a safe spot, empty the clip and then drop off the other side before the American helicopters would arrive.  And then there were the Americans who were promising roads and development if the place stabilized.

I enjoyed this book.  Junger brings the soldiers of the platoon alive as he tells of their lives and their transformation during their employment.  Using tape recorders and video recorders, in addition to good notes,, Junger does an excellent job at capturing the voice of the soldiers.  In places, Junger can be quite poetic, as he sat with a unit waiting in an ambush watching “the gray light begin to reassemble the world.”  Even in the chaos of war, one can find beauty.  I recommend this book, especially to those who wonder about how men respond to the dangers of combat.
Posted by sage at 11:09 AM