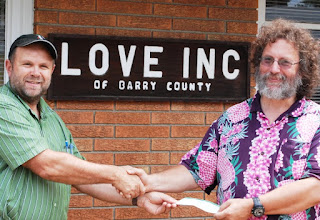 Sage recently completed the requirements for his Boy Scout "Do Good" merit badge, nearly four decades after he qualified for his last merit badge.  The National Council of the Boy Scouts decided to make an exception and award the badge to him because, according to the a spokesman for the organization, "one's never too old to do good."  He went on to tell how, as a scout, Sage was always in trouble and his leaders never thought he'd mount to anything.  But now, look at him.  He still hasn't amounted to anything, but the merit badge was awarded in the hopes that he might try harder during his remaining time on earth.

A few years ago Sage added Google Ads to his blog.  As he stated then, it was mostly an experiment and he planned to give away what he made.  He hasn't really attempted to optimized the ads, he's way too lazy to do that.  Instead, he just let the ads sit there.  As a result, he recently received his first check from Google,for $102.  He signed it over to Love Inc, a local ministry that seeks to help the poor.  .  Here he is handing the check to Steve, the executive director and the one with the hair.  The ads may sometimes be a hassle and often provide a little humor, but they can also do some good.  Sage encourages those who are not trying to make a living from their blogs to try to make the world a little nicer for someone else.   Use the ads and give away your earnings.  For those who are trying to make a living from their blog, Love Inc is open Monday through Friday to help and you'll need all the help you can get if you only make a hundred bucks every few years.