Explaining my absence (somewhat), Pittsburgh, a ball game and a train trip

I woke to the sway and jerking of the train as we make our way across junctions in the rails.  I look out into the gray dawn.   Tank cars surround us on both sides.  I am still tired and wonder why I didn’t draw the shades the evening before when I boarded the train in Pittsburgh.  But I was so tried that I crawled into my bed (the attendant had the beds already made, when I boarded at 12:30 AM.    We are just outside of Waterloo, Indiana.


It had been a long day that ended a long week in the Steel City. I had slept in, all the way to 7 AM, which sounds like a luxury except that it was after 2 AM when my last meeting of the previous day ended.  But it was Saturday and almost over.  There was a little wrapping up to be done and I didn’t have to be there until 9 AM.   I showered and grabbed a bite for breakfast and headed over to the conference center.  By 10:30 I was free to leave    I headed down the river and across the last of the sister bridges, the Roberto Clemente Bridge.  There are three identical bridges in Pittsburgh that all cross the Allegheny River.  They are referred to as the three sisters and used to also be known by the streets they linked (6th Street Bridge, etc) but now they have names.  The one downriver, which now leads into the ball park is named for the great Pirate who, at the top of his career, was killed flying in relief supplies to earthquake victims in Nicaragua.  The other two bridges are named for famous Pittsburgh natives: artist Andy Warhol and writer and environmentalist Rachel Carlson.  At the ball park, I buy two of the last seats in the house.  They were more than I had hoped to pay, being clubhouse seats, but I have wanted to see a game in this ballpark that’s rated one of the most beautiful in the country since it opened.  I buy my tickets, rush back across the river and to my hotel to check out and store my luggage and then back to the convention center to meet a colleague for lunch in a Greek restaurant before she has to catch the shuttle to the airport. 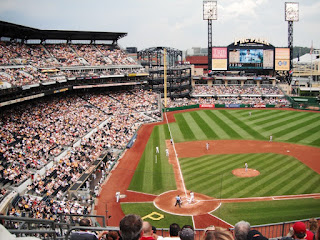 Although the week was tiring and I don’t think I ever got my money’s worth out of my bed at the William Penn (what a classic hotel), it was good to see old friends.  And there was good food and the fireworks on the fourth were wonderful, especially as I was able to watch from the roof of the convention center.


But the game was awesome, even with the ten minute downpour.  But it was hot, and very humid.  The advantage of the club house seats is that we could retreat into the air conditioned comfort behind the seats and wait for the game to begin (and later, wait for the rain to end).  The ball park is beautiful, with its open views out over the river and toward the city in which I had three enjoyable years.   Playing good ball behind the solid pitching of McDonald, the Pirates easily beat the Giants 3-1.  In the ninth inning, the Giant’s must have come to the realization that fate was against them as the Pirate’s Shortstop snagged two hard hit bouncers on the fly and, with beautiful midair acrobatic precision,  made the throw to first.  Then, for the last out, a hard hit line drive down the line was snagged on a sprint by the right fielder.  The game was over.  The other highlight of the game was the “Great Pierogi Race” between the fifth and sixth inning.   (Peirogi is an eastern European dish that’s kind of like round ravioli, but heavier, that’s stuffed with potatoes, cheese, meat or sauerkraut).
After the game, I got my luggage and headed to the train station where I waited for the ride home.  The train was half an hour late, time that we made up over night for we arrived at Chicago on time.  On the train, I slept and I had breakfast, which was highlighted by sitting across from an electrical engineer who works for Amtrak (he was heading to Galesburg, Illinois where there they are working on new signaling technology).   I should be home mid-afternoon.


(Posted from Chicago Union Station.  I have one more trip tomorrow, for three days, then I should be staying put for a while and hopefully having time to finish my sailboat project and get it on the water, otherwise I may have to convert it to an ice breaker).  On July 10, I edited this post and realize that I must have been more tired than I thought as I repeated a paragraph!
Posted by sage at 11:51 AM