An Evening on Carter Lake 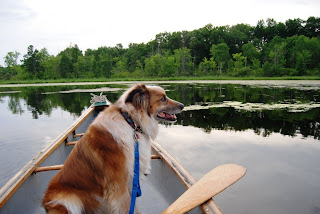 The dog and I took the canoe out on Carter Lake yesterday evening. This time of year, it isn’t completely dark till around ten, so even though I left the office at 7:30 PM (don’t feel too bad, I went in at eleven and took a two hour lunch), we still had plenty of time to enjoy the evening. I took a fly rod and spent some time tormenting bluegills, granting the few I caught a pardon, but mostly we paddled and watched the swans. One pair were mourning and gave off an awful cry after a snapping turtle pulled one of their cygnets under water. Trisket was interested what was going on and seemed to want to go check it out, but thankfully thought better of it. He may be superdog, but he can’t walk on water. As we were paddling back in, the male swan had moved out into deeper water, away from his family. After cleaning himself off, he stood up with his head straight in the air and his wings spread (they’re big birds!) and gave out a cry. I wish I could have had a photo of that, but the light was way too low by then. 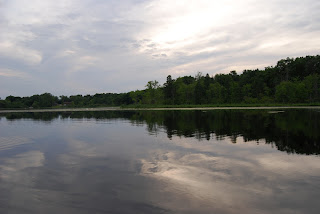 In addition to the bluegills, swans and turtles, we saw many redwing blackbirds in the cattails around the edges and several pairs of ducks. In the backwaters of the lake, we could hear a dozen or more types of birds singing. Playing bass in nature’s symphony were some bullfrogs. It was a wonderful way to relax and wind-down. I love watching the light change on the lake and how it's reflected in the water. I didn’t take too many photos as the cloud cover reduced the amount of light available and my dog isn’t too keen on me having my camera out (look at the way he’s only partly looking at me). When not in use, I keep the camera in a waterproof box and it’s also insured, otherwise I wouldn’t be foolish enough to have it out on the lake with the dog in the boat.

Have a wonderful Tuesday, folks.