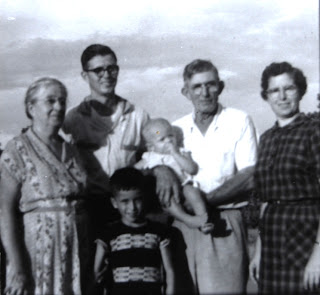 Four generations! That's me, the cute little guy sucking his thumb and held in his great-granddaddy's hands. My father and great-grandmother are to the left. My grandmother is on the right and my Uncle L (who is a closer to my age than to my dad's) is in front.

My great-granddaddy had given up raising tobacco by the time we moved into the house down the road from his farm. He leased out his tobacco allotment, allowing someone else to raise it. But he kept busy. With my great-grandma, they raised a large garden, had some chickens that ran around the yard and roosted in an old out-building, and kept a dozen or so whitewashed bee hives. The hives were in the woods separating our two houses, and even though I was never stung, I was always afraid to walk the trail running through the woods. If I was by myself, I’d run the whole way.

One day my dad and granddad came over and helped my great-grandfather harvest the honey. In addition to wearing lots of layers of clothes on a warm late summer day, they pulled on gloves and put netting over their heads. Granddaddy had a tin pot, which looked kind of like a tea pot or oil can. Inside the pot he placed oil soaked rags and set them on fire. By squeezing the handle, smoke would billow out of the spout, allowing him to chase the bees away while he robbed them of their honey. Back in the kitchen my mom and grandma helped my great-grandma separate the honey from the cones, storing the sweet nectar in jars. We kids stayed on the back porch, placated with pieces of the wax cone to chew and to suck out honey.

Whenever I had dinner with my great-granddaddy, if there was no desert, he would end his meals by placing a pat of butter on his plate and slathering it with either honey or molasses. Taking his fork, he’d mix the butter and syrup together and then sup it up with pieces of homemade biscuits. The honey he used for this treat came from his own bees. Although the molasses was “Grandma’s” (a store brought variety), I’m sure that earlier in his life he was using homemade molasses from the sugar cane he grew, pressed and boiled down into syrup.

Great-grandma, as I’d later recalled, looked a lot like Ma Joad in John Ford’s silver screen adaptation of John Steinbeck’s Grapes of Wrath. Plumb, she always seemed to have an apron over her dress except for Sunday mornings. She worked in a kitchen in which two stoves had been crammed along the outside wall. One was a modern gas range, which she didn’t like. Her preferred choice was a cast iron wood-burning range. Out back, there was a wood pile. I remember being there with my great-granddaddy as he split up “lighter wood” for cooking, I'd help gather up the split wood. Lighter wood came from the heart of pine and was so filled with pitch that it burned like wood soaked in kerosene. It was either used to quickly start a fire or to provide a quick hot flame. On this wood burning stove, great-grandma would bake biscuits and pies, fry chickens and apples, boil potatoes and beans, fix gravy and steam rice. At a family gathering on a Sunday afternoon, she’d have a feast prepared with three or four pies cooling out on the back porch.

The summer after we left Moore County, my great-grandma suffered a stroke. She and great-granddaddy had been out in their strawberry patch beside D’s pond, between the canebrake and the dam. Great-granddaddy had to run all the way home to call for help and by the time someone got there, it was too late. We were in Virginia and came home for the funeral, the first that I remember. The night before the services, we gathered at the large old funeral home in Carthage, where I’ve been many times since. My mother led my brother, sister and I up the casket and pointed out great-grandma’s hands and talked about her peeling apples out on the back porch. I’d never noticed her swiveled her hands, but today that’s what I remember best about her. Her hands were finally at rest.

Great-granddaddy lived another seven years. For a while, my grandma and her sister alternated staying with him during the day, helping him out with chores around the house. On one of these visits, grandma took great-granddaddy and me back through the woods on a trip down memory lane. We drove on a two-track across the sandy high ground, passing the two tobacco barns still in use by the man leasing great-granddaddy’s allotment. For a few moments the sweet smell of curing tobacco filled the air. Then we passed the sugar cane press which hadn’t been used in decades. The press was rusty, the frame was rotting away and the arm onto which a mule was attached to turn the press had broken off. We didn’t even get out of the car, but drove on a hundred yards or so to the house where my great-granddaddy spent his boyhood years. There was no furniture left inside, except for an old organ. Tobacco sticks (sticks onto which tobacco leaves were tied for curing) were stored in the living room. Several years later, the next time I visited that abandoned house, the organ was gone as was the mantel over the fireplace. Someone had even ripped the copper wiring out from the walls, wires that had carried electricity for less than a decade as rural electrification didn’t come about in these parts until after the Second World War. This house had been abandoned in the early fifties. The last time I saw the house, in the summer of 2001, the roof was falling in.

We walked around the house. In the yard were a few overgrown shrubs. Out back were fruit trees in need of a good pruning. My great-granddaddy told me about a pet chicken he had as a boy and how one Sunday, with the preacher over for dinner, his pet chicken was made into chicken and dumplings. My great-granddaddy had been a boy no older than I was at the time and he told the visiting preacher all about his chicken that they were eating. “After the preacher had left,” he said, “I got the whippin’ of my life.” He also told me about the time when he was a kid, a little older than me. He had slipped into a neighbor’s watermelon patch and was cutting only the heart out watermelons and feasting on the tasty fruit. With watermelon juice running down his shirt, he noticed that the birds were beginning to sing. The temperature was dropping, which was strange for the middle of a summer afternoon, especially with no clouds in the sky. He looked up and saw the sun disappear. He dropped his watermelon and ran for his life, as fast as his bare feet and skinny legs could take him, not wanting to be caught in another man’s watermelon’s patch on judgment day. He had just witnessed an eclipse. Both of these events occured back in the 19th century.

Like his father and grandfather, going back at least a half dozen generations, my great-granddaddy was a farmer. Six days a week, he’d be hard at work. On Sunday, he’d be a suit and at the Presbyterian Church where he served as an Elder and the Sunday School superintendent for over forty years. My last memory is of him sitting in a chair in the room in my grandma’s house, where he lived the last year or two. On the table next to this chair were his Bible, which he read faithfully and a folded up copy of The Pilot, a local newspaper that he read almost as faithfully as the Good Book. In this edition of the newspaper was a picture of soldiers getting ready to take off for France in the Great War. Great-granddaddy was trying to identify everyone. One of the men was his brother, who would be gassed in the trenches in Europe and live out his days disabled. The next time I would see my great-granddaddy, he’d be in a casket in that Carthage Funeral Home. The next day, in November 1969, he was buried beside his wife; just west of the church which he helped build and where he had served a lifetime.

This story is a follow up to my Uncle D story (which has a picture of him and his son, my Uncle D, in a tobacco field)
Posted by sage at 2:21 PM