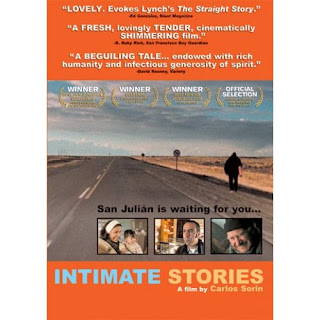 I love the title of this Argentinean film. It conjures up images of steamy bedrooms, illicit affairs, and backroad motels. It sounds like the title of a magazine normally kept behind the counter. But if that’s what you expect, you’re going to be disappointed. What was the American distributor was thinking by translating the Spanish “Historias Minimas” (Small Stories) into the English “Intimate Stories”? Maybe they thought the hint of sex would sell the movie. However, there are no such scenes in this movie.

Although not a great movie, Intimate Stories is a good and beautiful movie. The director, Carlos Sorin, weaves together the stories of three individuals from a small town of Fitz Roy. Although quite different, all three are desperate as individually they travel across Patagonia to San Julian. In their journeys, there’s disappointment, but also generosity that ultimately leads to hope. Maria (Javiere Bravo) is a young mother who has been selected to appear on a cheesy TV game show. She is hoping to win a multiprocessor, but comes with a make-up kit. However, just being on television brings a smile to her face. Roberto (Javier Lombardo), a traveling salesman who spends his time studying sales techniques, hopes to win the hearts of a young widow in San Julian. Knowing her son’s (or is it a daughter, he's not so sure) birthday is near, he purchases a cake and has it decorated as a soccer ball. His compulsive drive to have the perfect cake is humorous. Yet Roberto ends up disappointed. When he stops to deliver the cake, he sees the young widow and her son with another man. Heartbroken, he eats the cake alone in a hotel room, only to discover the next day that the man was her brother. The third character is Don Justo (Antonio Benedictti) an old grocer who has heard that his dog Badface has been spotted in the city. Along the highway, Julia (Julia Solomnoff), a government biologist with an engaging smile, offers him a ride. The way she graciously deals with the eccentric old man leaves you with a sense that she’s an angel. The same is true with a rough highway worker who later takes care of him and reunites him with “Badface”. Both are compassionate. Although we learn along the way that Don Justo had run over his dog in his car, he comes home with a dog that he thinks is Badface.

The pace of the movie is slow. It takes a while to get into it, but you’ll be glad you stuck with it. The scenery of the high desert of Patagonia, often filmed in the morning or evening light, is enough reason to watch the film and to stir a desire in my soul to travel there. The film is also uplifting. Each character experiences gracefulness in their travels. The dialogue is sparse, making this an easy movie to read the subscripts or to practice listening to Spanish.
Posted by sage at 9:22 AM