Freedom at Midnight: A Book Review 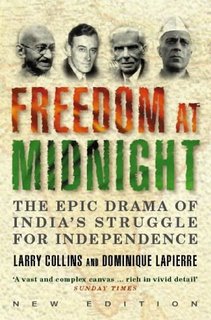 
What a mess. For centuries the British had controlled the Indian subcontinent. Then, at the end of World War II, with their economy ravaged by war, the British decide they can no longer afford their empire and is ready to grant India its independence. Louis Mountbatten, the former commander of the Allied troops in South Asia during the war, is called to be the last British Viceroy. His job is to give India back to the Indians, a task more difficult than it sounds. Freedom at Midnight tells the story of Mountbatten’s work in India as well as weaving in stories from the history of the subcontinent to explain the challenges facing Britain as she pulled out of India. Parts of the book are horrific (religious wars always are). Other parts are hopeful, especially the unfailing work of Gandhi in striving for a peaceful, nonviolent solution. Reading this book at this time in history, I couldn’t help but think that perhaps there are some parallels between British India and our occupation of Iraq. History does have ways of repeating itself.

I didn’t set out to read this book for insights into Iraq. A couple months ago I’d asked a friend of mine who directs missions in India to recommend one book on the country. I was getting ready to have a colleague from India working with me for six week and I wanted to prepare myself. Unfortunately, I didn’t get this book until after J. arrived. But I read most of it during his stay and learned enough to ask questions and as a result, learned more about his homeland. Although the book is about a political process, the authors give background information necessary to understand how modern India came about. They cover the development of the Hindu religion, the Mongols bringing in Islam, and the rise of a small but important sect, the Sikhs. They provide backgrounds to many of the key players in the British opposition and the early development of a modern India, especially Gandhi, Patel, Nehru and Jinnah (the father of Pakistan). And they provide interesting insights into the culture, such as Mountbatten’s blunder in setting the date for independence (he didn’t check the stars) or how others caught up in the upheaval depended on things such a palm reading and astrology.

Mountbatten came to India early in 1947. The subcontinent was already experiencing its trouble as Gandhi’s Congress Party (who wanted a united subcontinent) was pitted against the Moslem League (who called for a separate Muslim nation of Pakistan, meaning “land of the pure”). The Moslem League was willing to go to great ends to achieve their objective. In 1946, they called for a day of “Direct Action,” to show that if necessary, they’d resort to action to achieve their own nation. In Calcutta, Muslims pouring out of Mosques, hearing the call for action, went on a rampage in Hindu slums, burning business and killing those in their path. Soon, Hindu neighborhoods banded together and retaliated, burning business and killing bystanders in Muslim neighborhoods. Although Calcutta had had a reputation of being a dangerous place, it had never experienced this kind of carnage. Over six thousand people died in what became known as the Great Calcutta Killings.

At first Mountbatten wanted to keep the subcontinent intact, but it became clear to him that partition was the only solution. He tried to get all parties to agree with him and he contracted with Sir Cyril Radcliffe, a British lawyer, to draw the boundaries for the new countries. This creates difficulty as there were large Moslem majorities in both northwestern and northeast India as well as a concentrated pocket of Sikhs in the northwest. Doing the best he could, Radcliffe created what became known as Pakistan, a nation with two parts, separated by India (in the early 70s, East Pakistan became Bangladesh). The two nations received their independence in the midst of celebration on August 15, 1947, but the boundaries weren’t identified until after independence. The celebrations were short lived, especially along the western border, as millions of Hindus and Sikhs moved east into India as Moslems began to move west into Pakistan. All along the route, great atrocities were carried out as both sides attacked one another and sought revenge (Moslems pitted against Hindus and Sikhs). So great was the carnage that buzzards over ate and could no longer fly while dogs and wild animals feasted only on the choices parts of the dead bodies.

As bad as the atrocities were, it was a miracle it didn’t spread throughout the subcontinent. Thanks to the work of Gandhi, who was able to unite both Hindus and Moslems, Calcutta and Delhi and other places in India were spared the disaster that occurred in the west. Another interesting development is that the new Indian leaders recalled Mountbatten, admitting they could no longer control the country, pointing out that when they should have been learning to govern, they were in English prisons. For a period after English rule ended, an Englishman remained in control behind the scenes, directing Indian leaders.

It is obvious that the authors have great respect for both Gandhi and Mountbatten. The book ends with Gandhi’s assassination, (carried out by Hindu fanatics who felt he was too generous toward Moslems). Following Gandhi’s death, the worse of the atrocities ended even though tensions between India and Pakistan continue to this day.

I recommend this book if you are interested in how modern India developed. You’ll learn why Kashmir is still a confused state and why the tension continues along the Pakistan border. The book also provides insight into the work of Gandhi, especially the last year of his life and details in the conspiracy against him.
Posted by sage at 9:56 PM