Christmas Presents (or what kind of post can I put up in order not to look at Ford as soon as I open up my blog...) 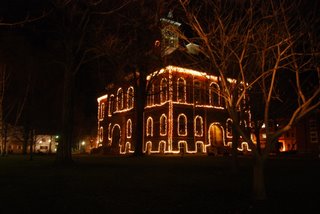 Okay, about that last post… Every time I opened my page it, it was a blast out of the past. Looking at Ford behind in his desk made me feel like I was in a time warp, back in the mid-70s. So I thought I’d post a picture I recently took of the local courthouse decked out for the holidays. It would even prettier if we had a blanket of snow on the ground! But we’re in this weird heat wave; it’s barely getting below freezing at night. 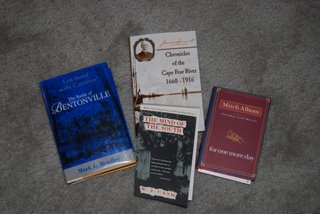 Bone, down in Alabama, who really likes to receive cash for Christmas, has a neat post where you can complain about cheap or wacky Christmas presents you've received. I really don’t have any complaints this year. I got the following books for gifts (guess which one wasn’t on my list, even though it has been recommended to me?). I also got two gift cards for book stores. And, oh yeah, something else, that allows me to snap these pictures. What did Santa leave you?


Speaking of Ford, I’m not sure what to make over Woodward's revelation about the former President thinking Iraq was wrong, but not wanting to say anything until he was dead (I suppose it was to avoid speaking ill about a fellow Republican). On the one hand, this is upsetting for it seems that Ford was putting his political party of national interest. On the other hand, he was willing to let Woodward reveal this after his death, not after Bush's term is over, so they may be something good to come out of this if it encourages others to speak out.
Posted by sage at 1:39 PM