All the Wild that Remains 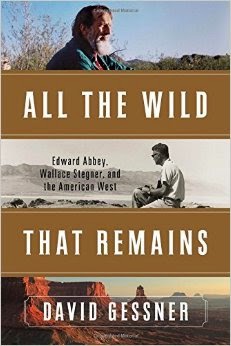 David Gessner, All the Wild That Remains: Edward Abbey,Wallace Stegner, and the American West (New York:  W. W. Norton, 2015), 354 pages including notes and index and a few photos.

I have waited for this book for over a year.  I'd read others of Gessner's books and had reviewed My Green Manifesto in this blog.  When I learned Gessner was writing a book on two of my favorite authors, I knew the book would jump to the top of my TBR pile when released.  The book was released a little over a month ago.

Wallace Stegner and Edward Abbey appear to be opposites.  After an unstable childhood that lead him all over the American and Canadian West, Stegner became grounded as he spent decades developing the writing program at Stanford.  Abbey was more unsettled.  He grew up in the coal country of Pennsylvania, born to a free-thinking radical father and a mother who was deeply involved in her Presbyterian Church.  At the age of 17, and with the country in World War 2, Abbey spent a summer hitchhiking and hoboing around the West.  After a brief stint in the military, he returned to the West, living a hard and unsettle life as he worked various jobs while attempting to make a name for himself as a writer.  Although he was not in search of riches, Abbey unsettledness may have had more in common with Stegner's father, the model for "Bo Mason" in his autobiographical novel, The Big Rock Candy Mountain. In their personal lives, Stegner remained married to the same woman while Abbey married over and over again.  Stegner held a respectable academic position and worked alongside government officials to bring about environmental changes and worried what the longhaired hippies might be doing to the country.  Abbey, on the other hand, encouraged (if not participated in) monkeywrenching (or eco-terrorism, depending on your interpretation) as a way to make a statement and attempt to save a portion of the American West.  Although there are many differences between the two men, they both loved the American West and the region defined them.  Interestingly, Abbey spent two semesters at Stanford and studied under Stegner but then went off on his own direction.  The two men never met again (although they apparently exchanged some letters).

In All the Wild that Remains, Gessner brings these two men back together and suggest that their vision for the West provides us a model for dealing with the ecology challenges of the West.  Taking a summer to drive from his home in the East through the American West, Gessner visits many of Abbey's and Stegner's old haunts while interviewing their friends and colleagues.   His journey begins with a visit to Wendell Berry on his farm in Kentucky.  Berry also studied under Stegner and was friends with Abbey, even reading a letter from Stegner at a memorial service for Abbey following his death.  From Kentucky, Gessner travels to Boulder Colorado, where he had formerly lived.  Traveling in 2012, he learns of the damage of the wildfires that have been plaguing the West including the Boulder.   From there, Gessner's travels takes him to Moab, Utah, a town that is built on recreation and enjoyment of the wild, which allows Gessner an opportunity to reflect on the damage to the land by those who loves it.  He visits Arches, the location of Abbey's classic non-fiction book, Desert Solitaire. His travels takes him on to Salt Lake City, a city that Gessner finds beautiful and realizes why Stegner loved it so  (On a personal note, Gessner needs to visit SLC in the winter and after skiing up in the canyons, drive down to SLC in a thermal inversion and experience how bad the smog can be).  He paddles down the San Juan River, getting a feel for the canyon country that defined Abbey.

Later in the summer, he meets up with his and daughter who travel with him.  Then, his wife returns home, and Gessner sets out with his daughter, traveling north, visiting Doug Peacock (Abbey's model for Hayduke in The Monkeywrench Gang and Hayduke Lives), and on into Canada where he visits Stegner's childhood homestead. (I couldn’t help to think about Abbey’s character in The Fool’s Progess, having a vision of traveling with his daughter). Inserted into Gessner's 2012 road trip are other trips to the West, where he visits the Southwest and California, exploring the stomping grounds for both authors, as well as trips to New England to meet with Stegner's family.  In these travels, Gessner visits friends of Abbey and Stegner, along with other authors who played a role in their development.  He also ponders what each of them might say to current environmental problems brought on by climate change, sustained drought and an increasing population.

Although Gessner provides a basic outline of each author's life, this is not a dual biography.  Instead, he uses the writings and the visions of the two authors to reflect how we relate to the land.  His writing is a playful approach, providing insight into both authors while offering both critique and suggestions of dealing with current environmental issues.  One of his linger questions in the book is which author was the true "radical."  This question came from a conversation with Utahan author Terry Tempest Williams who suggests that Stegner was the real radical.  It might seem the other way around as Abbey was pretty much an anarchist, but Abbey was also strong on individual rights.  Stegner, on the other hand, appreciated the role the early Mormon's cooperation (a communal economy) played in the development of Utah and felt such an outlook was necessary in the West.  However, the cooperative economics of 19th Century Utah have given way to a more individual centered economy (one like Stegner's father lived) that extracts wealth and leaves a mess behind.  Although he doesn't endorse Stegner's vision outright, Gessner left me with the idea that he leans toward his ideas.  I agree with Gessner that Abbey's writings are fun and am sure that if I picked back up and reread The Monkeywrench Gang, as Gessner did, I would also find it a bit childish on the second reading.  Gessner considers Abbey’s non-fiction to be superior to his fiction (which I would agree). I consider A Fools Progress to be the finest of Abbey's fiction and it appears Gessner would agree with my assessment (277).

I recommend this book, especially to fans of Abbey and Stegner.  I enjoyed riding along with Gessner on many of the same roads I've covered in my own travels as I listened to his ideas about the region and these two authors.   In a way, this book seems as just the beginning of a dialogue.  Abbey and Stegner may give us starting points for a dialogue, based on the land they loved, but we are in desperate need to create a more sustainable vision of how humans are to live on this planet.

For an attempt to summarize my understanding of Edward Abbey, click here.