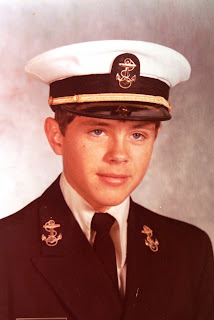 Being on the water has long been a coping mechanism for me. When stressed or even when I’ve been humiliated, I seek the solace of water. I think I first realized this when I was a senior in high school. The first photo is of me as a high school senior, dressed in Navy Blues. I can assure you, I haven’t owned (or worn) a double-breasted suit since. The second, which I have shown before, was taken later in the spring of my senior year. 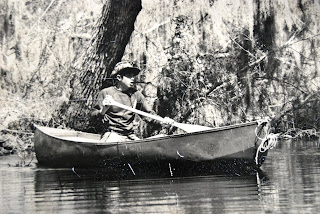 It was late winter and although the sun was beginning to rise higher in the sky, the trees were still a good month before budding out and the air still chilled when I slid my canoe into the waters of Town Creek, a blackwater stream in eastern Brunswick County. After stowing gear, I laid a paddle across the gunnels to steady the boat and crawled in. Kneeling, I push off from the shore and into the current. In the headwaters, there’s enough water flow in the winter that I didn’t have to do much paddling, just navigate through the bends, as the water flowed around cypress trees draped with Spanish moss. The tannic acid from these trees give the water its dark hue. As I rounded a bend, I flushed up a pair of wood ducks. I floated past the few islands of high ground, where tall longleaf pines reached up toward the heavens, their sparse canopies letting in enough sun to take the chill out of the air. I passed swampy bogs, a likely home for a gator in summer. I found myself having to pull over fallen trees. Standing on the frosty logs, a perfect sunning spot for a cottonmouth in the warmer months, I dragged the boat over and hop back in on the other side. I paddled and observed, forgetting what I was missing out on and the events of the past week. It no longer mattered that I was a senior in high school and had no idea what I’d be doing with my life. As a cool breeze blew into the swamps, I forgot about the girl from North Brunswick who had broken my heart and the one from Hoggard whom I’d disappointed. Forgetting my troubles, I was content to let the water draw my problems downstream toward the mighty Cape Fear, where they join with other waters and were eventually flushed out into Atlantic.

Her name was Cheryl, I think, but I am no longer sure. She worked as a cashier at the same grocery store where I worked and lived across the river in Brunswick County. She was a senior at North Brunswick High, which in itself made her a novelty. All the other high school students working at the store attended either Hoggard or New Hanover High. Attractive, with curly blond hair that fell down upon her shoulders, there was something mysterious about her. She never gave any of the guys at the store the time of day nor did she hang out with any of the girls our age. Coming from Brunswick County, across the river, there was a certain stigma attached to her. She smoked, but that was true of many girls in North Carolina in the mid-70s, back when you could buy legally buy cigarettes when you were 15 years old. My high school, like many in the state at that time, even had a smoking courtyard. I was drawn to her hillbilly aloofness and had a friend from her school, another amateur radio operator, check her out. I learned she was dating an older guy, someone well into his 20s. But one day at work, in mid-winter, this all changed. She started joking with me and that evening, after the store closed, we spent several hours necking in the parking lot. I’d never kissed another woman who smoked, with the exception of my grandmother, and I’d never kissed a woman like we kissed that night in her car. At some point that evening, with the car windows steamy, I asked her to the ROTC ball.

I spent three years in the Naval Junior Reserve Officer Training Corps in High School. It was an interesting program which had, by the end of my junior year, completely turned me off on all things military. For much of my junior and senior year, my identity was blurred. My liberal friends on the debate team, riding me for being in ROTC called me “John Birch,” while my friends in ROTC, who assumed anyone on the debate team had to be a communist, started calling me Fidel (at this time I couldn’t have grown a much of a beard). One of the highlights of the ROTC program was the annual ball. This was a fancy gala in an upscale ballroom, an event that made the Senior Prom in the gym feel cheesy. We’d all wear dress uniforms and those of us who were seniors, having been in the program for three years and who were now officers, got to wear swords and act like we were Stonewall Jackson or at least Admiral Farragut (except that he was a Yankee). As I had not been dating anyone, there had been significant pressure on me to ask Sue, a girl in the ROTC program. I liked Sue and was planning on asking her when I asked Cheryl if she wanted to go with me. When word got around that I was bringing someone from another school, I realized her disappointment.

Over the next few weeks, Cheryl and I talked about the ball. Although she seemed excited at first, as the date approached, she began avoiding the subject and when I said something about it, she seemed fidgety. So I wasn’t surprised although crushed, when, the weekend before the ball she told me she wasn’t going to be able to go. Sue already had another date and I was too shy to go out at the last minute and try to find someone else. Instead, I skipped the ball and as I’d already asked for the weekend off, set out early that Saturday morning, my brother helping me shuttle my car, to explore Town Creek. I began in the headwaters, launching the canoe at a low bridge on a gravel road, and floating downstream. As more water flowed into the creek, it became larger and wider. After the confluence of Rice's Creek, down near the river, the hardwood swamps gave way to vast fields of marshy grass where rice once grew. Somewhere along the way, in this ecosystem where waters rise and fall with the tide, where the osprey hunt and the shad run, I realized I would survive. That Monday, back at school, when my friends were all talking about the ball, I told them about my adventures.
Posted by sage at 11:20 PM