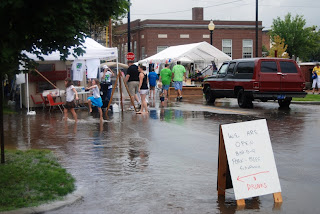 This weekend was our little hamlet’s big summer festival, which means that he community shuts down (or at least most of the streets are closed). There are two parades and every owner of a classic car (I think that means one 20 years old or older and still running) and every vendor within an 100 miles descends upon our town. In addition, every garage band in a fifty mile radius heads over to play at one of the three stages set up around town. It’s work, but it’s also fun. Lots of people who use to live here come back, the high school always has their reunions this weekend (but that doesn’t matter to me because I didn’t go to school here), and plenty of greasy foods are consumed. 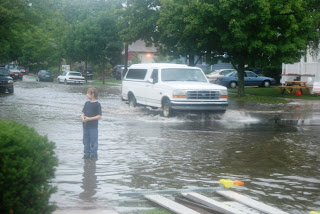 The festival starts on Friday about noon. About 3 o’clock, as things were just getting going well, the storm hit. In a few minutes, the skies opened up in a manner not seen since Noah was christening his boat. The storm drains were overwhelmed and the streets flooded, sending vendor’s products floating down the street toward the river. Nobody wanted to be near the amps and stuff on the music stages, especially since they were all powered with a hodge-podge of extension cords that were lying in six inches of water. Music was cancelled for the evening. After the rain, I brought out my camera and got these shots (the water had already dropped a few inches by the time these photos were taken). 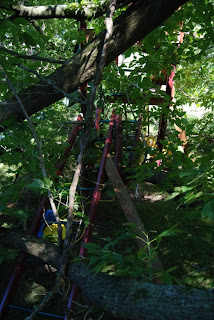 The Friday storm was just the latest in a series. On Thursday evening, storms that blew threw Chicago a few hours earlier hit. A cherry tree in the back yard had its top blown out. Several neighbors lost trees and some folks were without power for the rest of the weekend. The Friday storm also contained some nearby tornadoes. With all the rain we’ve received (after having one of the driest July’s on record), the ground is sloppy and on Saturday night in a rather stiff breeze, we lost another tree in the back yard, a box elder. This tree took out my daughter’s swing set and play tower. She was getting too big for it anyway, but the neighbor’s grandchildren enjoyed it when they visited. Another tree is leaning and will probably have to be removed as it is hanging over the power lines. If it isn’t removed soon, another storm will probably take it out and put several of us the neighborhood in the dark. 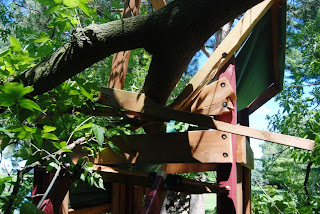 By Saturday noon, the rains had ceased and the skies cleared and the rest of the weekend was a blast. And it appears there’ll be more than enough firewood for the winter. Troubles in one area often lead to blessings in another…
Posted by sage at 8:46 PM