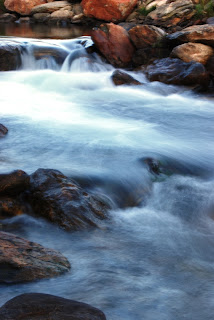 Photo taken by Sage in June 2007, in Western North Carolina near where this story took place.


Has it really been thirty years since the King died? April 16, 1977. I still remember that day. I was on my first paid vacation, taking a week off from the bakery to run rivers in Western North Carolina and East Tennessee. Three college students, my uncle L and my brother W and I, were camping on the banks of the Nantahala River. As the only one in the group working full time (while going to school), I was also the only one still getting paid during our week’s adventure. None the less, our budget was tight. We survived the week on peanut butter and jelly and baloney sandwiches. It was to wet to cook and we didn’t have enough funds to eat out often.

It had been raining off and on for two days. It didn’t matter that you were wet during the day. You were wet anyway, running the rivers and spending time playing in holes and shooting over ledges and falls. At night, our tent was dry, but it wasn’t large enough for us to hang out in. So in the hours between running the river and sleeping, we hung out in L’s purple Gremlin. Although practical, with it’s squared off hatch back enabling it to carry a lot of gear, its practicality didn’t make up for the fact it was one of the ugliest cars ever built. But inside the Gremlin was dry and we ate our sandwiches and read magazines while alternating between listening to the radio and talking about a river that had just opened up in East Tennessee, the Ocoee.

Jimmy Carter was president. We had a copy of Outside, which was a fairly new magazine then. The feature article talked about protecting rivers and had a photo of the President running a river, probably the Chattahoochee in North Georgia, if my memory is correct. We all laughed at Jimmy. In one hand, he held his paddle in the air while his other hand grasped one of the gunnels on the canoe as the boat dropped over a small ledge. The contorted look on his face didn’t exactly express the confidence you expected from the President. “Keep your paddle in the water,” we advised the photo, “it won’t do you any good in the air.”

And then, as we talked and read and ate our sandwiches inside a car with steamed windows, we heard the news. For a few minutes we were silent. None of us were big Elvis fans. Disco hadn’t yet become the craze of the land helping us appreciate the king, but we all had a sense that an era had passed. Something had changed.

The next day, we left the Nantahala for the Ocoee. Larry led the way in the purple Gremlin, with two kayaks strapped to the top and the back filled with gear. I followed with my Orange Opel, a small car that was almost as ugly as L’s, which was hidden under the canoe and kayak tied to the top. The sun returned, but with all the rain, the river was high. Until earlier that summer, much of the water for the river had been diverted through a flume that ran along the side of the mountain and then dropped down into a hydroelectric generator. But after nearly a century of use, the flume was being rebuilt, opening a section of river for daredevils in kayaks. Unlike the Nantahala, which by the mid-70s become a major tourist attraction, there was no one else around, no other paddlers to gleam information about the best approach to a rapid. With all the rain, the river was muddy with silt and foamed angrily. We ran it anyway, shooting down through deep holes and pushing through ten foot standing waves. At one point, after rolling my kayak twice, I just couldn’t get it back up and bailed out. I’d never felt so alone, bobbing through the rapid with my paddle in hand, the waves blocking my view of W and L. When I was spit out at the bottom of the rapid, there was L, holding my boat in an eddy. I’d survived. We ran the rest of the river without problems then went on to the Hiawassee and Doe Rivers, before heading back home for work and school.

The summer was over, and for a week that summer nothing much matter. But Elvis was dead and the world had changed.
Posted by sage at 10:48 AM