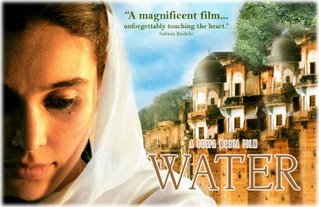 Beautiful and hopeful, depressing and disturbing, this movie by Indian director Deepa Mehta will please your senses and prick your conscience. The movie opens with a quotation from The Laws of Manu, a Hindu holy book.

A widow should be long suffering until death, self-restrained and chaste.
A virtuous wife who remains chaste when her husband has died goes to heaven.
A woman who is unfaithful to her husband is reborn in the womb of a jackal.

Water is set in the holy city of Varanasi, on the Ganges, in 1938. It’s a time of change, but the old ways die hard. There are still child marriages in India. Chuyia (played by Sarala), is an eight year old widow. Upon the death of her husband, she is sent to live in a convent-like compound with other widows who live ascetic lives. As is the custom, her head is shaved. She is given only one meal a day and is forced to wear only white. There, she is watched over by Madhumati, an evil headmistress, and becomes friends with the beautiful Kalyani, another child-bride-widow (played by Lisa Ray), and Shakuntala, a woman of great faith.

It becomes obvious that although the women are supposed to be chaste, Madhumati is having Kalyani pimped out to rich men living across the river. She later meets Narayana (played by John Abraham), who falls in love with her and against his mother’s wishes, asks to marry her. Kalyani agrees (which causes her to be punished by Madhumati), but when she realizes that she’s been a prostitute to Narayana’s father, she drowns herself. Upon her death, Madhumati then has Chuyia, who thinks she’s going to her mother’s home, to be used as a prostitute. When Shakuntala learns this, she rescues Chuyia and takes her to Gandhi who has just been released from prison and is stopping on a train to greet people at the station. There, she runs into Narayana and asks him to make sure Gandhi takes care of the child. The movie ends with Chuyia on the train, leaving the station.

Although the subject is depressing, there is hope. The train pulling out of the station, taking Chuyia away from her horrible existence is hopeful. Throughout the movie, there is talk of Gandhi. In the movie as in the era, Gandhi represents hope. Narayana, who is a follower of Gandhi, is also seen as a moral and liberating figure.

This movie shows how religion and traditions can be used to control and manipulate people, especially women. When Kalyani learns that there are laws which now allow widows to remarry, she asks a priest about it and is told, “We ignore laws that don’t benefit us.” The ancient laws got the wife of the deceased out of the way so the husband’s family could claim and divide his wealth. Another example of the way women are marginalized is shown in a conversation between Narayana and his father. The son is told that Brahmas can sleep with any women they want to and those woman will be blessed. At another point, the priest, who seems to know some of the women are being used as prostitutes, quips about the gentry’s unnatural concern for widows. Although Kalyani is being used as a prostitute, she remains pure. She quotes from an ancient poem: “Learn to live as a lotus, untouched by the dirty water you live in.” Shakuntala, the faithful one, maintains that there must be a reason for the widows to be sent to this place, to which Narayana replies, that it’s because of money, but the real reason is being disguised by religion. Toward the end of the movie, it is said that Gandhi is the only man that listens to his conscience, to which it is asked, “what happens when our conscience conflicts with our faith,” a question raised throughout the film.

In addition to the movie, the commentary by the director that’s on the DVD is worth watching. For someone like me, with just a little knowledge on Hinduism and Indian culture, the director points out various customs portrayed throughout the movie. She maintains that the movie isn’t an attack on Hinduism but on the misinterpretation of the religion. This distinction didn’t stop Hindu Fundamentalists from holding up the production of the move for four years. Eventually the filming of the movie was moved to Sri Lanka where it was safe to film.

This is a beautiful movie. The filming was often done early in the morning or late in the evening, providing soft light. The river scenes shot at night depend upon torches and funeral pyres for lighting, often with flames reflecting on the water. The director uses minimal dialogue, augmented with light, shadows and expressive eyes to create emotions.

I highly recommend this movie. It will make you think, not just about Hindu Fundamentalism, but also about how religions and customs can be misused for the benefit of a few and how at times we can be hopeless in face of such traditions.
Posted by sage at 10:58 PM