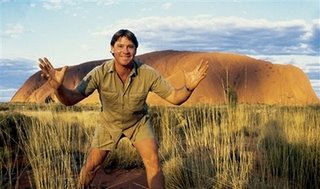 It’s early, it’s a holiday, and I have the feeling that today is going to be a disaster. The Crocodile Hunter is dead. He’s my daughter’s hero. Animal Planet is her favorite show. This man played with all kind of deadly snakes and animals and it was a sting ray that finally got him—putting its barb into his heart which is something I can’t quite fathom. This might be worse than when Mr. Rogers died when she was four years old. Maybe she’ll sleep all day. Pray for me, my daughter, and especially for Steve Irwin’s family.
Posted by sage at 8:00 AM