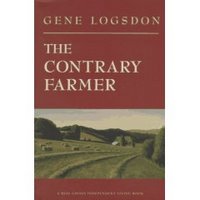 
Knowing how I am always recommending Wendell Berry’s books, a friend suggested I read something by Gene Logsdon. Last week, I came across his name while looking in an Alabama bookstore and purchased a copy of The Contrary Farmer. I’m glad I did.

Logsdon farms a 32 acre “cottage farm” in Ohio. His book is a primer for those interested in making a living on a small farm. It’s his thesis that although you won’t get rich on a small farm, you can have a good life. He provides suggestions for the right size of such a farm (keep it small enough so that you’re not overwhelmed or feel the need to grow large), the type of animals to raise and crops to grow, how best to organize your farm to minimize work, an introduction to a new way of looking at economics and finally some wonderful writing as he describes the seasons and the joy of working outdoors.

There are two keys to success in Logsdon’s plans. First is enjoying what one does. Early in the book, he notes, “Where love is at work, work is mostly play.” (page 3) Logsdon obviously enjoys his work around the farm and you see his playful approach through his writings. Life on the farm is to be a joy. “Farming without raising and eating sweet corn ten minutes from the path is like living out a lifetime as a virgin,” he writes in one of his many suggestions of enjoyment on the farm. (page 152) A second key to success is diversity. He states early in the book that diversity on a small farm is essential to easing the workload, a theme he comes back to over and over again. Even his crop rotation plan for his “small fields” is done in such a way to increase productivity while reducing weeds (and thereby reducing work and the need for chemicals). “Variety is not just the spice of life but the indispensable ingredient,” he quotes from Thomas Eisner, suggesting that it could be the Contrary Farmer’s motto. (page 153) Logsdon farm has a variety of grains, produce, fruit and animals (chickens, sheep, cows, pigs, and fish).

Throughout the book, Logsdon comes down hard on the farming enterprises that exist today, suggesting that the only way that they’re profitable is with government subsides. Yet, he does have respect (and maybe a little sympathy) for these “industrial” farmers, suggesting that a successful cottage farmer should befriend them. All farmers are going to have challenges but should be up to the task. “Compared to nature, zealots and bureaucrats are a piece of cake,” Logsdom sarcastically notes. (page 200) Furthermore, he maintains the reason the United States has the most successful farming in the world has to do with soil and weather, not with “so-called capitalism” or innovation, suggesting that even the Soviet state run farms would have faired well in our Cornbelt. (page 83)

As much as he criticizes the large corn operations that wash away more soil than the corn they produce, he devotes a chapter to corn production on the cottage farm and generally raises an acre or two on his farm primarily for feeding animals (this is in addition to sweet corn). He is also critical of the organic farm movement for their failure to use treated human waste as a fertilizer and for being so “hard core” that they don’t allow flexibility. Logsdon admits to occasionally using chemicals, primarily as ways to spot control weeds or bugs. His irreverence toward organic farming reminds me of Edward Abbey, an environmentalist who wasn’t above tossing an empty beer can out the window of his pickup truck. Moderation seems to be one of his virtues.

Logsdon came from good stock. He grew up in the area he now farms and his wise father once said: “A bulldozer in the hands of a wise man does good work; in the hands of a fool even a spade is dangerous.” (page 175) This illustrates Logsdon approach to tools and technology. He uses them, but he doesn’t let them rule him which is what happens as farms get so big that their equipment have to be larger and therefore more expensive and the farmer ends up being controlled by the bank to grow more and more which, when done by all farmers, means lower and lower prices. By maintaining a cottage farm, Logsdon thinks one can provide healthy food for ones family and a good lifestyle, things that don’t make economic equations.

The cottage farm sounds like a bit of heaven, especially for someone retired or who has another job, but with free time. However, I’m not sure if I’m ready to make such a commitment as it means that one will need to stick around home a lot more, for there are always chores to be done. However, I enjoyed reading the book and recommend it to anyone interested in farming or just good nature writing.
Posted by sage at 9:55 PM