I am trying to do this on my ipad and have missed some photos and formatting....  But I am traveling with only the ipad, no laptop, so I am a little limited...


The steeple is topped with a swan, which has a bullet hole which supposedly came from a Union soldier setting his sights on his gun during the Civil War.  The swam came from a reference to John Hus, an early Reformer from Prague, who supposedly said as he was being burned at the stake for heresy in the 15th Century that he would return as a swan.  Many Lutheran followers saw Luther as the swan who had come back to reform the church. 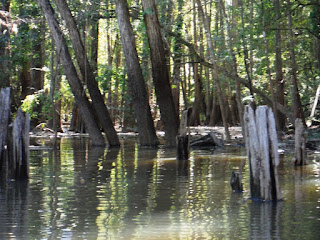 This is the site of the Old Savannah Road, where a tragedy (or an atrocity) occured in the Civil War.  One of the Union flanks was heading toward Savannah and being hindered by a large following of freed slaves.  The commanding General Jefferson Davis, who ironically shared the name with the Southern President, ordered his soldiers to quickly cross the bridge and then to take it up so that they could be freed by the large group of freed slaves.  Behind Davis' troops was a Confederate calvary who, when approaching, the slaves panicked and jumped into the water.  No one knows just how many drowned.  Accounts range from a dozen or so, to hundreds, to even a  thousand.

We had lunch along the banks of the Savannah River and then, thanks to one of our numbers being a Lutheran pastor, we were met by his colleague at the old church for a tour.  In the afternoon, we paddled back to our vehicles for a drive back through Savannah during traffic. 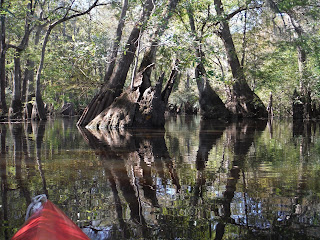 I'm heading up to North Carolina for the weekend.  Tonight I will attend a football game for my high school and tomorrow I'll be at a class reunion--my first in 3 decades!  What do you have as plans for the weekend?
Posted by sage at 10:07 AM