This is the story of my trip a week ago—it’s been a busy week and I haven’t been able to finish up writing this or about any other fun things I’ve done over the last couple of weeks.  Next week, I’m heading to NYC for nine days.  Hopefully, that’ll give me plenty of topics to explore in my blog. 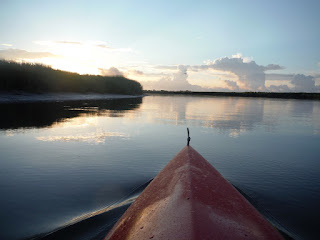 The sun beat us up over the horizon, when we rounded the big bend in Lazarette Creek.  I put on my sunglasses as the rays shine through the booms and netting of the shrimp boats docked before the bridge to Tybee.

"We just missed it," Tim sighed

It's not quite 6:30 A.M. and we're paddling against a strong incoming tide as we go under the bridge and head toward the Savannah River.  On our right is the historic Cockspur Lighthouse, left over from the time before all the shipping into Savannah was concentrated into one channel.  Low tide was at 4:30 AM this morning and one could still walk out across the mud and oysters to the brick structure at the end of Daymark Island by the South Channel of the river.  The water in the shoals in front of the lighthouse is rough and provides a little challenge as we're tossed around in the mix of a north wind and  incoming tide worked against the outflowing current.  A few minutes later we've passed the lighthouse and enter smoother water.

To starboard (my right) is the north point of Tybee, where there is still a lighthouse used to guide vessels into the Savannah Harbor.  To port is Fort Pulaski, one of the brick fortresses built after the gallant efforts of Fort McHenry in Baltimore Harbor to repel the British in the War of 1812.  Fort McHenry, whose bombardment was observed by Francis Scott Key and led him to write the nearly unsingable National Anthem, held and in the two decades after the war, brick fortresses were built up and down the American coast.  However, by the time the Civil War came along, with rifled artillery that could blast through thick brick walls, such forts became obsolete and death traps to soldiers garrisoned there.  After 36 hours of bombardment during the Civil War, the South surrendered the fort and the port of Savannah was closed to shipping.
Setting a northern course, the three of us head to the rock break wall that protects the shipping channel of the Savannah River.  The rising tide has begun to cover some of the rocks, providing us a passageway into the channel that leads to the fourth largest port in the United States.  Ahead of the others, I cross the break wall and wait in the river, but the tide keeps pushing me back toward the rocks and I find I must keep paddling just to keep my place.  When the others arrive, we look to make sure no ships are coming, then sprint across the river.   We're not sure how where we can get through the break wall on the north.  Tim has informed us that we might have to paddle out into the open water, but when I reach it, I find a gap that's easy to cross and wait for Matt and Tim on the far side.  I'm now in South Carolina.

There, the silence is disturbed by squawking of pelicans perched on the exposed rock along with the droning of a diesel engine in a large shrimp trawler heading out to sea.   Actually, we're already in the sea.

From here, we decided to head toward the water tower on Hilton Head.  Originally, our destination was Daufuskie Island, but it seems as if Hilton Head is doable.  Between us and there is an island we think about stopping to stretch, but as we approach and before we can read the "Stay Away" from this nesting site, we decide not to stop because the stench of poop from 1000s of birds is just too much.  We paddle east of Bird Poop Island, far from the shore of Jones and Turtle Islands, places also protected for the purpose of bird nesting.  This area, north of the Savannah River, is fed by the Wright and Cooper Rivers.  Porpoises play in the water and occasionally a pelican will do a head dive and come up with a small fish.  We paddle toward a shoal line that exists on the north side of Cooper River, where its waters drop sand on its way out into the sea. 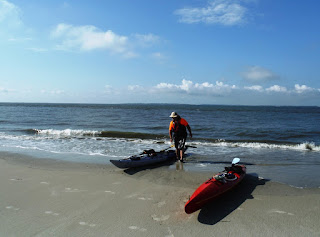 As we approach, it appears that there may be a jetty instead of just shoals, so we decide to return to our original plan and paddle westward to Daufuskie.  It’s a good distance as we're way out into the ocean.  We land at Blood Point at 9:30 AM.  This site was named for a battle that supposedly occurred here in the mid-18th Century between two rival Native American tribes.

Daufuskie was the island that Pat Conroy taught on during the 1960s and which he used as a model (although he changed the name) in the book The River is Wide.  There is still a small Gullah community on the island, but much of the land has been purchased and is now private resort communities.  We walk along the beach a bit and rescue a bunch of horseshoe crabs.

Mammals must not be the only ones in the animal kingdom who rationality is compromised by sex.  These horseshoe crabs are having orgies in the surf which has tendencies to roll them over and leave them exposed to the sun and birds.   Sometimes the waves will roll them back over, but soon the tide is falling and our efforts saves a few from baking in the hot sun far from the receding waters.  After a rest in the sun, we push off and begin to head back the way we came.  A number of smaller shrimp trawls are working the area north of the river and are followed by porpoises looking for handouts (fish that get thrown overboard).   The tide, which has turned is beginning to run out to sea, is still higher than it was this morning and we have no  problems making it over the break wall.  By the time we get to the Cockspur Lighthouse, it is a fight to paddle upstream.


After going under the Tybee Bridge, I hang close to the marsh on the northside, taking advantage of the eddy current to make the paddling easier.  I spy a woman painting next at the end of a road where the old bridge used to connect to Tybee and stop to image the scene she is painting, the marsh and shrimp trawlers on the south side of the channel.  At 12:30 PM, we arrive back at the boat ramp.  Tim, who has tracked our trip on his phone, notes that we've paddled 12 1/2 miles (6.5 miles out and 6 miles back).  I am tired but happy.